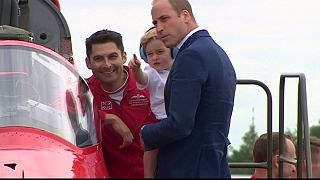 Britain’s Prince George was the star attraction on Friday at the Royal International Air Tattoo, billed by UK media as the world’s largest military air show.

The two-year-old prince toured aircraft with his parents, the Duke and Duchess of Cambridge, at the evet, held at a Royal Air Force base in Gloucestershire, England from July 8 to 10.