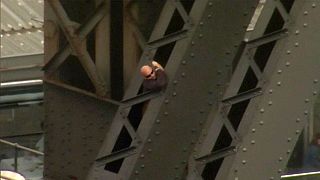 Man arrested after climbing up an arch of Sydney Harbour Bridge

A man was arrested after climbing up an arch of the Sydney Harbour Bridge on Friday in an incident that brought traffic to a standstill. According to local media, the man had taken a taxi to the bridge, left the taxi and proceeded to climb the iconic Sydney landmark. A police operation was launched. The man climbed down at about 10.50 am local time (0050GMT) and was arrested. During the operation, traffic lanes were closed on the bridge, but they have since been reopened.