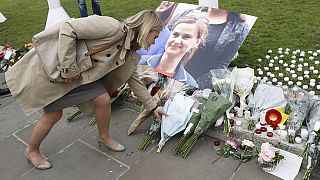 Flowers, candles and tributes were left near the UK’s parliament in London to remember MP Jo Cox, who died after being shot and stabbed in an attack in northern England.

The killing of the MP caused deep shock across Britain and the suspension of campaigning for next week’s referendum on the country’s EU membership.

Labour MP Cox, 41, who was a vocal advocate for Britain remaining in the EU, was attacked outside her constituency advice surgery in Birstall near Leeds.