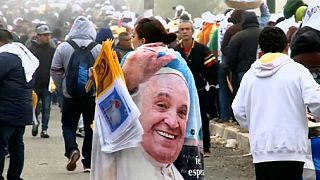 Updated: 16/02/2016
<p>Pope Francis travelled on Monday (February 15) to Tuxtla Gutierrez, the capital of Chiapas state, part of Mexico’s poor, indigenous south, which has fallen far behind wealthier parts of the country and where he will authorise the use of native languages for Mass in a bid to stem a tide of Protestant conversions.</p>
no comment