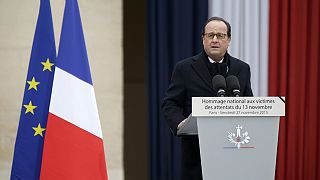 Updated: 27/11/2015
<p>A national memorial service has been held in France to honour the 130 people who died as a result of the Paris attacks a fortnight ago.</p> <p>President François Hollande spoke at the service, which was attended by survivors and victims’ families.</p> <p>A minute’s silence was also observed and the names of those who died read out.</p>
no comment