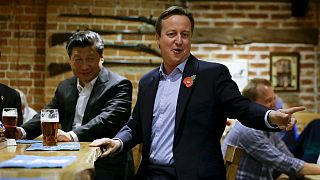 Cameron took a break from the formalities of hosting the state visit to take Communist Party General Secretary Xi to The Plough at Cadsden, near his official country residence at Chequers, for a fish and chip supper washed down with a pint of Green King India Pale Ale.

“I dropped into The Plough at Cadsden for a pint of IPA and some fish and chips with China’s President Xi,” Cameron said on Twitter.

Cameron was shown buying Xi a pint. Both leaders were later shown without neckties holding half-drunk pints of ale and chatting with locals.