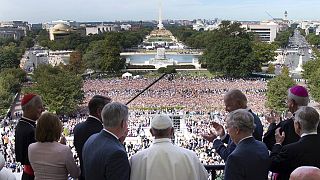 Following his historic address to the US Congress, Pope Francis appeared on its balcony to salute the thousands who had come out to see him.

Francis had earlier said the US should reject hostility to immigrants and treat them humanely, directly addressing a thorny subject that is dividing the country and stirring debate in the 2016 presidential campaign.

In the first speech by a pope to a US Congress, the Argentine pontiff said the United States ‘must not repeat the sins and the errors of the past’, when dealing with immigrants.