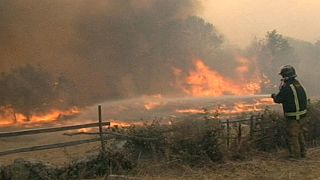 Ourense province, in Spain, has been overwhelmed by a forest fire. The fire was declared level two by the Galician Government. Eight brigades of local firefighters battled the blaze with the aid of five helicopters and six aircraft. The flames have burned more than 100 hectares, and the alleged perpetrator of the fire have been arrested by Galician Police.