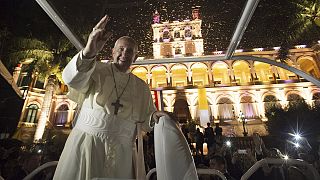 Pope Francis, wrapping up his three-country tour of South America, urged people living in a flood-prone shantytown in Paraguay to stay united in their struggle for better living and working conditions. Francis looked moved as he heard harrowing tales of life in Banado Norte, a warren of shacks not far from downtown Asuncion that are home to about 100,000 people, many of whom are squatting on city land after being forced from their farms.