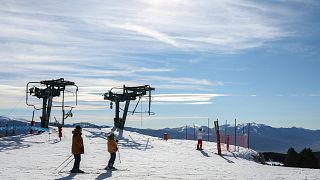 The dispute is over pension reforms, pay and working conditions.

It could cause chaos for skiers looking to get away during the February holiday season, hitting ski resorts in what is one of the busiest times of year for the industry.

When are ski resort workers going on strike?

In France, the holiday season stretches from 4 February to 4 March when hundreds of thousands of people will be hitting the slopes.

Force Ouvrière (FO), which represents ski lift operators, has issued a notice of “indefinite strike” from 31 January. Confédération Générale du Travail (CGT), which also represents seasonal workers, has put forward an open-ended notice of its intention to strike from this date.

This doesn’t necessarily mean that strike action will continue after 31 January, however. Head of the FO union Eric Becker said in a statement that the current plan is for ski lifts to operate normally on 1 February.

He added, "we do not want to further weaken companies already in difficulty.”

But more dates are likely to be added if their demands for better wages and working conditions are not met alongside concerns about pension reforms. The unions want to put pressure on the government to discuss these issues.

Becker told UK newspaper The Times that they had decided to call for a strike during the February holidays “because demands are listened to more during this period.”

CGT has called for “especially strong action” during the Ski World Cup taking place in Courchevel and Méribel from 16 to 20 March.

Rolling stoppages are expected rather than all ski lifts being closed at once.

What will the impact be at France's biggest ski resorts?

So far ski resorts are playing down the impact of the strikes.

Sara Burdon from Morzine Tourist Office says, "It’s obviously very concerning to have the threat of strike action, but we are not expecting this to be an issue in Morzine, or the rest of the Portes du Soleil."

The Portes du Soleil is a cross-border group of ski resorts in both France and Switzerland. In France: Abondance, Avoriaz, La Chapelle-d'Abondance, Châtel, Les Gets, Montriond, Morzine and Saint-Jean-d'Aulps. The resorts in Switzerland are: Champéry, Morgins, Torgon, Val-d'Illiez, Les Crosets and Champoussin.

Burdon saus that "very few" workers in the Portes du Soleil are union members and no strikes have been declared for January or February.

Euronews Travel have contacted ski resorts in other areas of France for comment.

Why are workers at ski resorts going on strike?

The industrial action is part of widespread strikes across France in protest of pension reforms and an increase in the retirement age from 62 to 64.

Over 1 million people took part in marches across more than 200 cities on 19 January, disrupting transport, schools and most of the country’s civil service. As few as one in 10 services were operating on some railway lines.

President Emmanuel Macron has called the reforms “just and responsible”. But unions have promised the “mother of all battles” calling for another day of action on 31 January.

The start of the extended action by ski resort workers will coincide with this. The two unions are also asking for better wages and unemployment insurance that is adapted to the needs of seasonal workers.