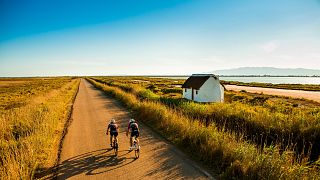 From the beaches of Barcelona to the sweeping landscapes of the Pyrenees, Catalonia is defined by the sea and the mountains. With a proud cultural identity, this corner of northwestern Spain is full of modernist masterpieces, sloping vineyards and spectacular beaches.

“Catalonia is fantastic, it has everything - it has mountains, it has the sea, it has gastronomy, it has culture,” says Roger Torrent i Ramió, Minister of Business and Labour of the Generalitat de Catalunya. “It also has a history of welcoming diverse cultures and civilizations.”

Catalonia is fantastic, it has everything - it has mountains, it has the sea, it has gastronomy, it has culture.

But with so much on offer, it can be difficult to know where to start with this stunning region. Luckily though, the Catalan Tourist Board has come up with the perfect solution - the Grand Tour of Catalonia.

What is the Grand Tour of Catalonia?

Inspired by the epic tours of European aristocrats in the 19th century, the Grand Tour is a circular loop of the Catalan region. The series of suggested routes and activities takes travellers from the buzzing streets of Barcelona to the vineyards of Penedès.

Depending on your itinerary, the 2,000 km circuit can be completed in 13 days by car or broken up into separate sections and enjoyed over one or more trips.

The tour offers everything from a taste of Catalan cuisine to insights on the artists who were inspired by the region’s rugged landscapes.

Where does the Grand Tour of Catalonia start?

Although you could start the tour at any point on the circuit, if you want the full experience you should begin in the Catalan capital.

Barcelona is renowned for its art, Gaudí’s epic Sagrada Familia, the energetic Primavera Sound Festival - which began in the city in 2001 and has now been exported around the world - and its buzzing nightlife.

Begin your trip with a tour of the city’s modernist buildings, followed by a cooking lesson on the Passeig de Gràcia, Barcelona’s most exclusive avenue.

Here, you’ll learn how to create two traditional Catalan dishes - esqueixada (a salad of cod and tomato) and crema catalana (a dessert similar to crème brûlée) before ending the day watching the sunset aboard a catamaran.

To really experience the city in full force, align your Barcelona trip with some of the amazing events on offer throughout the year. Visit during the first weekend of June if you want to dance the night away at Primavera, in August for the colourful Gràcia Festival, or if sailing is your thing, then make sure to put October 2024 in your diary as Barcelona is hosting the America’s Cup.

Barcelona is hosting the America’s Cup 2024

The world’s oldest international sporting tournament, the America’s Cup, is coming to Barcelona for the first time in 2024. Dating back to 1851, the sailing contest - nicknamed the ‘Auld Mug’ - sees different countries compete over a series of yacht races.

The current title holders, New Zealand, will be defending their top spot alongside teams from the UK, Switzerland, Italy, the USA and France.

The races will take place close to Port Vell, with viewing platforms overlooking all the action happening at sea.

The cup, which is held every three to four years, is returning to Europe for its 37th edition for the first time since 2010, when it was held in Valencia.

“This is great news, because this is an opportunity not only for Catalonia, but also for the whole of Europe,” says Torrent.

What else can I see on the Grand Tour of Catalonia?

The Grand Tour of Catalonia will take you from Barcelona to Montserrat, Catalonia’s most iconic mountain. Once here, a cable car will sweep you through the surrounding parkland, with epic views of the Llobregat Valley below.

Over the next few days, you’ll visit the wine region of Penedès before heading on to Reus, the hometown of Gaudí.

The trip can be tailored to your tastes, but the 13 day journey could see you swimming with bluefin tuna, rafting in the Llavorsi or getting to know the surrealist work of Slavador Dalí at the Dalí Theatre-Museum.

Along the way you’ll also visit UNESCO World Heritage Sites, hike through national parks such as the Delta de l’Ebre and sample delicious food and wine.

To find out more about the Grand Tour of Catalonia, you can download the app or visit the website here.