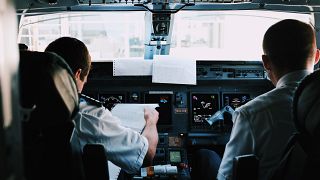 Some airlines want to start flying with just one pilot in the cockpit of passenger planes instead of two.

Airlines and regulators say the move would cut costs and reduce problems caused by staff shortages.

But some pilots - and passengers - have expressed concerns over safety.

Here’s why aviation authorities think flying solo is the future.

Why are there two pilots on passenger flights?

At the moment, it is the norm to fly passenger planes with two pilots in the cockpit.

This makes it much easier to prevent and deal with emergency situations. A single pilot may be unable to manage critical circumstances alone.

While flying, one pilot is usually handling the controls and steering the plane while the other is monitoring for any issues or anomalies.

This also allows each pilot to take breaks and avoid fatigue, which can have fatal consequences. Similarly, if one pilot falls ill, the other can take over.

Is it safe to fly with just one pilot?

Over 40 countries, including the UK, are now pushing for a change in the rules.

They have appealed to the International Civil Aviation Organization (ICAO) - the UN body that sets the regulations - to help find a safe way for commercial planes to fly with a single pilot.

The EASA suggested such flights could start in 2027.

But some pilots have warned that this could pose a safety risk.

“The people going down this route aren’t the people who fly jets every day,” Tony Lucas, an Airbus SE A330 captain for Qantas Airways told Bloomberg.

Lucas, who is also president of the Australian and International Pilots Association (AIPA), warned that an emergency can get out of hand so quickly that there is no time for someone else to reach the cockpit.

When might airlines start flying with a single pilot?

There are still safety aspects to iron out before lone pilots could become the norm.

Authorities need to establish how to deal with a situation where a pilot falls ill or is unable to continue flying.

This might include introducing remote assistance from ground control or automation technology.

However, the aviation industry has been pushing for this change for decades.

Since the 1950s, the number of staff within a commercial plane cockpit has already reduced from around five to two.

Airlines also need to convince passengers that the change wouldn’t cause additional risk.

“The technology is there for single pilots, it’s really about where the regulators and the general public feel comfortable.”

The change could come gradually, beginning with allowing a pilot to be alone while the aircraft is cruising.

This is a less critical moment than take off and landing.

However, the ultimate goal is to make flying as automated as possible with less responsibility on the pilot.

This wouldn’t become a reality until at least 2030, the EASA said.