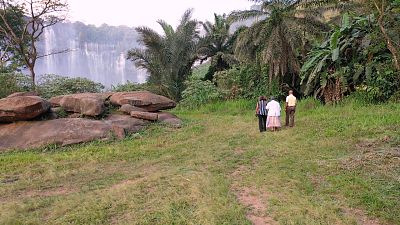 The Kwanza River stretches nearly 1000 kilometres across Angola. During Portuguese colonial times, it was a major shipping route for millions of slaves.

In a voyage of remembrance and natural beauty, Euronews accompanied a family from Virginia, in the United States, on their historic journey to retrace the path of their ancestors Antoney and Isabel who were taken as slaves from the Ndongo Kingdom in Angola in 1619.

The Tucker family follow the so-called Kwanza Corridor that took their ancestors from the Malanje Province, with its Calandula Falls and Pedras Negras -- or Black Rocks -- to the Atlantic coast.

Six million enslaved Angolans, including Antoney and Isabel -- who ended up in the then English land of Virginia -- were sent abroad.

"I cannot imagine what it was like, to have to walk 100 miles to be enslaved and in bondage to this place, and then shipped off in the bottom of a boat...I can’t imagine that experience that they survived", said Wanda Tucker, Vincent's sister.

The Tucker Family traced their DNA to what is now Angola’s Malanje Province -- with its breathtaking Calandula Falls -- where their journey began.

"Just looking at this beauty, and just feeling a sense of "wow", this is where my family is from", Wanda Tucker said.

For the Tucker family, their trip to Angola is revealing both in its beauty and in the shocking history.  They hope this experience will raise awareness.

"The story needs to be told", said Carolita Jones, a cousin of the Tucker family. "I wish everybody could experience it, especially those African Americans who know that they have roots in Africa and they want to start somewhere. This is the place they can start."

Which is why Jones says this point of departure for African slaves needs global recognition by UNESCO.

"The Kwanza corridor is such an excellent place…to become a World Heritage site. There are so many locations that mean so much, that have so much history", she added.