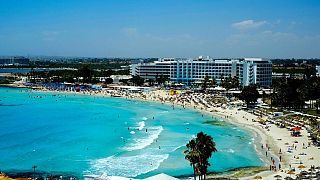 Nissi Beach with people as they enjoy the beach and the sea in southeast resort of Ayia Napa, in the eastern Mediterranean island of Cyprus, Saturday, May 22, 2021   -   Copyright  Petros Karadjias/Copyright 2022 AP
By Ruth Wright  •  Updated: 14/06/2022

Cyprus' tourism industry is taking a huge hit from the lack of Russian and Ukrainian tourists, with an estimated loss of €600 million this year alone.

How many tourists from Ukraine and Russia usually visit Cyprus?

In 2019, Russian and Ukrainian tourists accounted for a fifth of all tourists to the island nation. In 2022, the number of arrivals is close to zero.

Businesses are feeling the worst impacts, especially local travel agencies that work with big tour operators focusing on the Russian market. "There are hotels, especially in the Famagusta area, Ayia Napa and Protaras which are suffering mostly because they had the extensive contracts with tour operators from Russia. And they are facing huge difficulties at the moment." says Haris Loizides, board president of the Cyprus Hotel Association.

Some hotels on Cyprus' east coast that catered to Russian vacationers are feeling the sting too. "They might not achieve the numbers that they were anticipating, but at least they have some solution with these other markets, especially the European ones," says Loizides.

But, he says, hotel owners haven't given up entirely on getting Russian tourists to Cyprus this summer. He says they're looking into getting them to Cyprus through countries not affected by the flight ban, like Serbia, Georgia and Israel.

"We are maintaining close cooperation with Russian clients and exploring possibilities of getting them into Cyprus through points in Europe or outside Europe, which are not affected by the sanctions," he says.

What made Cyprus popular with Russian and Ukrainian tourists?

Along with the sun, sea and sand that Cyprus is famous for, it has particular significance for religious people.

The Kykkos Monastery, on the northeastern ridgeline of Cyprus' Troodos mountain range, has been home to the silver-covered icon of the Virgin Mary for nearly a thousand years. Before the pandemic, hundreds of Russian and Ukrainian Orthodox faithful visiting Cyprus would come daily to venerate the relic.

Tradition dictates it was fashioned by Luke the Evangelist from beeswax and mastic and blessed by the Virgin herself as a true representation of her image.

This monastery, along with the tomb of St. Lazarus in Larnaca and the monastery of Stavrovouni, are important Cyprus stops for Russians and Ukrainians on pilgrimages to the Holy Land.

Other countries that rely on Russian and Ukrainian visitors like Turkey, Cuba and Egypt also braced for losses just as tourism began bouncing back from the pandemic.

How is Cyprus making up for the missing tourists?

Despite the upheaval, officials say that they have worked to find new markets, even before Russia invaded Ukraine. They say this means Cyprus will make up a large chunk of the lost revenue.

While there were no direct flights from France to Cyprus two years ago, 20 flights will take off each week this year. Weekly flights from Germany and Scandinavian countries have also increased to 50 and 30, respectively, this year.

How much do tourists spend per day in Cyprus?

The increased flight capacity means more tourists are expected from European countries this summer. the good news for Cyprus is that these travellers spend more per day on average than Russians.

According to Cyprus Deputy Minister for Tourism Savvas Perdios, "The per person expenditure per day is lower from Russia than for many other markets." A Russian spends around €60 per person per day, whereas other nationalities spend €90, Perdios says.