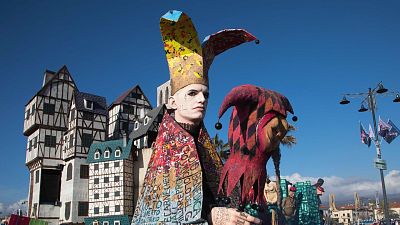 Hyperrealistic floats flood the streets of Viareggio with the return of its infamous carnival   -   Copyright  Reuters Connect
By Ben Anthony Horton  with AP  •  Updated: 23/02/2022

Hyper-realistic spacemen, giant aliens and floating polar bears are just some of the sights you’ll discover on the streets of Viareggio this year.

The Italian town’s annual fiesta - the Carnival of Viareggio - is back with a bang after the coronavirus pandemic limited last year’s festivities to just 5,000 spectators.

But with vaccinations rolled out and Italy’s coronavirus threat downgraded, the seaside promenade is packed once again for the mesmerising celebration.

"We are slowly getting back to normal,” says Marialina Marcucci, president of the Carnival of Viareggio.

“We have a capacity of 80,000 people, but we limited it to 40,000 people because we know that this edition must have a slow start after the pandemic."

Full capacity or not, this year feels like a rebirth for the people of Viareggio.

“The carnival is not a show for the sake of a show. We parade to involve the audience around us. For us, the carnival is where we find ourselves.”

The story behind the spectacle

The first Carnival of Viareggio was held in 1873 as an act of mockery towards the noblemen of Lucca, a nearby town.

Donning makeshift masks, a number of citizens protested against the high levels of taxation forced upon them by the wealthy middle-classes.

Over the decades, the celebration has adopted a more international outlook.

"Before there was much more political satire, but now there are contemporary issues,” says Rachele Andrea Ferdani, a visitor to this year's fiesta.

“The audience appreciates it and gets more excited with these themes.”

Formed of steel and papier mâché, it usually takes an entire year to create one of the town’s colourful floats.

Organisers claim the carnival will always be there to mark world events - whether good, bad or downright comical.

"The Carnival of Viareggio has always had an important role in history,” says Marcucci.

“It was the carnival which marked the end of the two World Wars, as people came back to parade in the streets and give hope for a new start. The carnival was a sign of hope, and let's hope that it will be a real restart for us too."

The winner of the prize for the best float will be announced on the last day of the festivities.

Next year's carnival will mark 150 years of the event.

Watch the video above to see the return of Tuscany’s colourful floats.