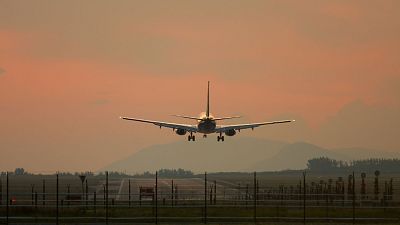 Hundreds of thousands of viewers have tuned in to watch a livestream of planes landing at London Heathrow Airport during Storm Eunice today.

A red weather warning for wind is currently in force over London and the southeast, as well as in parts of southwest west and south Wales as the Met Office warns of winds in excess of 90mph.

“This is where the skill of a pilot really comes in,” says Dyer, watching pilots navigate bumpy landings on the runway.

His Olympic-style commentary on the arrivals is keeping viewers all over the world entertained, as he notes the origin of planes and the aircraft models.

‘This guy’s all over the shop,” he said of one particularly hairy landing this morning, over the roaring wind. Other landings have been greeted with cries of “easy, son!” and “fair play, mate”, as he praises the men and women trying to complete their journeys.

"All the fun of the fair," is another favourite catchphrase, as Dyer fields calls from broadcasters wanting to stream his footage and interview him in his paddock by the runway.

Dyer is a professional aviation livestream broadcaster and presenter according to his Linkedin page, delivering live ‘on the day’ content - usually to considerably fewer viewers.

He has told one presenter that his late father was a pilot. "It's a shame he's gone now, I would've loved to have had some chats with him about flying in these conditions," he adds.

Airports across the UK are urging passengers to check their airlines for the latest updates to flights, with many cancellations and delays continuing this afternoon.

One easyJet flight from Bordeaux to London Gatwick attempted two landings before the plane was forced to return to the French city, three hours after it departed.