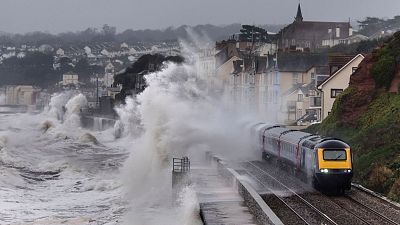 The UK is braced for more travel chaos as a second storm hits this morning (18 February).

Storm Eunice has been upgraded to a ‘red’ warning for London and southeast England as well as in parts of the southwest and south Wales. This is the highest level in the Met Office’s ranking of weather warnings, meaning there is a threat to life from flying debris.

It is the first time the danger-to-life weather warning has been issued for London and the southeast of England since this system began 11 years ago, and only the third such wind warning to be used in the UK since March 2018.

An amber warning remains in place for much of the rest of Wales and England as far north as Manchester.

Rail travel is significantly disrupted, with no Transport for Wales services at all today, National Rail announced this morning. Curtailed services are still running elsewhere, but passengers are being urged to avoid travelling.

It comes fast in the wake of Storm Dudley, which brought chaos to roads, rail and ferry services across northern England and Scotland on 16 February and left thousands without power.

Fallen trees and flying objects create a serious hazard for train drivers - with a trampoline obstructing one train for two hours outside Cardiff Central station on Wednesday.

An estimated 8 million trees were felled by Storm Arwen in November, and forestry officials expect Eunice to uproot even more.

Gusts have already been recorded of almost 87.5pmh near Swansea, and are expected to exceed 90mph later in the day, driving waves up to 22 feet off the Cornish coast.

Can you take the train during Storm Eunice?

National Rail has an overview of which services are still running, and which have been amended or suspended altogether. Only the Eurostar, Caledonian Express, Stansted Express and Transport for Greater Manchester are currently unaffected by the storm.

Most rail companies have asked people not to travel today. Transport for Wales Rail warned this will be “the largest and most impactful storm affecting Wales for many years,” and has suspended all services. The publicly-owned rail company is accepting tickets for today over the weekend, or offering full refunds.

LNER and Great Northern are also allowing customers to change their day of travel. As 50 mph speed restrictions are in place during the storm, journeys that do run will be significantly delayed.

If you’re planning on travelling by train today then keep an eye on the latest social media and website announcements from the rail company you’ve booked with.

Are flights affected by Storm Eunice?

Flights have been cancelled from numerous airports under the red warning areas due to gale force winds.

Bristol Airport remains open but some airlines are proactively cancelling or delaying flights, it said in an update on Twitter this morning. “It's a dynamically changing situation and customers are advised to keep updated with the latest flight info by checking their airline's website before travelling to the Airport,” it added.

A Cardiff Airport spokesperson says, "A red warning has been issued by the Met Office for Friday 18th February from 0700 to 1200 due to the adverse weather. Customers are advised to check regularly with their airlines for the latest flight information."

London airports are also impacted by Storm Eunice. At least 65 flights - departures and arrivals - have been cancelled from Heathrow Airport so far, and 114 delayed by more than 15 minutes, according to the latest aviation data from FlightStats by Cirium.

One flight from Bordeaux to London Gatwick attempted two landings before the plane was forced to return to the French city, three hours after it departed.

London Luton and Stansted Airports have also warned of pre-flight cancellations online. While all airports and airlines are advising passengers to leave extra time for their journeys today, as rail, bus and shuttle service trips are affected.

Road users are being urged to take care too as wind speeds pick up ahead of Storm Eunice.

“We’re encouraging drivers to check the latest weather and travel conditions before setting off on journeys and consider if their journey is necessary and can be delayed until conditions improve,” says head of road safety at National Highways, Jeremy Phillips.

He adds, “In high winds, there’s a particular risk to lorries, caravans and motorbikes so we’d advise drivers of these vehicles to slow down.

“Drivers of other vehicles should be aware of sudden gusts of wind which can affect handling and braking, and give high-sided vehicles, caravans, and motorbikes plenty of space.”

If high winds reach a persistent tempo, bridges may even be closed to traffic and diversions put in place.