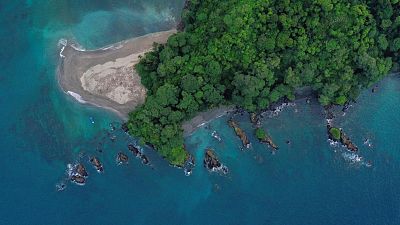 Until 1984, this 26 square kilometre island situated 55 kilometres off Colombia's Pacific coast was a tragic place, where political prisoners and dangerous criminals were sent to serve out their sentences - sometimes until death.

Far from prying eyes, inmates were left to suffer at the hands of the island's brutal guards.

"Damned be this place," wrote one former inmate in a poem.

These days, only a few crumbling prison walls remain, and the island is better known as an eco-tourism hub, attracting scuba-divers and nature-lovers looking to explore Colombia’s incredible biodiversity.

The only way to reach Gorgona is a two-hour boat ride from the coastal town of Guapi, hidden among mangroves.

Gorgona is a humid mix of volcanoes and jungle, where it rains daily and the waters teem with dolphins and whales.

It was discovered in 1526 by Spanish conquistadors, who lost 87 men to venomous snake bites within a few months of arrival.

It was thus named after Medusa, a Gorgon in Greek mythology whose hair was made of snakes.

For a time it was a pirate haven, but before long the Colombian state appropriated it to build the prison.

"There are many legends around Gorgona," says Corazon de Jesus Aguino, a park technician and local celebrity.

"Most of them are unverifiable, but what is certain is that it was a place of punishment and terrible suffering."

More than a thousand prisoners passed through the prison: murderers and rapists, but also political detainees from La Violencia, Colombia's ten-year civil war.

Most have been swamped by the encroaching jungle, but one remains, revealing a series of wooden bunk beds without mattresses.

"Each prisoner was designated a number," he says.

Visitors were rare, and outdoor exercise was only permitted for prisoners helping to cut down the forest.

One place embodies the misery of the prison more than any other: the disciplinary quarter where isolation cells are secured with heavy iron bars.

Here, the most feared punishment was called 'the can' - an 80-centimetre wide pit where prisoners were forced to stand for days on end in squalid water up to their necks.

Appointed in 1981, Lopez proudly claims to have ended abuse by guards and "pacified" the prison.

"The guards here were thieves, corrupt, they took their revenge on prisoners," says Lopez, now retired.

"Ten 'cans' were still in use. I stopped all that. There was also torture through hunger. Inmates were only allowed potatoes and a bit of rice, with occasionally a bit of barely cooked snake.

In total "almost 150 prisoners died in Gorgona," he estimates, denying that the bodies were thrown into the sea.

Rebirth from the ruins

The prison was closed in 1984 after pressure from human rights organisations, as well as ecologists and scientists eager to protect the island's natural paradise.

Over 70 per cent of Gorgona's jungle had been cut down by the prisoners.

But since then, the jungle has begun to reclaim its lost territory.

Over 147 different types of birds and 100 species of insect can be seen within Gorgona’s dense rainforest.

The surrounding ocean attracts dolphins, porpoises and yubarta whales, while the island’s coral reef is the largest in the Colombian Pacific.

On sunny days, visitors can tackle the island’s three main hiking trails, ascending to over 400 metres above sea level.

Or if history is more your thing, you can spend your time uncovering Gorgona’s pre-Hispanic past - a series of archaeological sites dating back to 1300 BC.

But while tourism on the island continues to grow, some are concerned about the island’s dark history being lost for good.

“The government will have to decide what it wants to preserve of the prison," says one national park employee, who preferred not to be named.

"Is this a cultural or historical asset? Or should it be left to disappear forever?"

Watch the video above to decide for yourself.

These are Brits' top holiday destinations for 2022