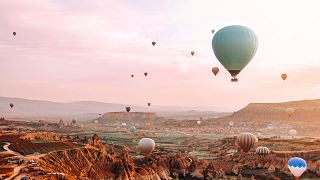 Most Europeans are ending 2021 how it began: grounded. But despite a flurry of travel bans this month, there’s been some remarkable adventures along the way.

At Euronews Travel we’ve been lucky to go on a few of our own, from the ice sheets of Greenland to Mexico’s cenotes. But for the most part we’ve been inspired by the incredible stories of globe trotters, record-setters and those in search of new horizons.

To look back on an unusual year in travel, and give you a taste for adventure in 2022, we’ve rounded up some of our most popular, strange and exciting stories from the past 12 months.

Lexie Alford managed to travel to every corner of the globe by the time she was 21 - a life goal thankfully completed before 2020.

We caught up with the now 23-year-old traveller to find out how she did it and what she learnt on her epic journey.

The news that Italy was selling dilapidated houses for €1 caught our attention earlier this year. If it sounds too good to be true that’s because it is, financially speaking.

But some Italian villages really do want new residents, and there’s definitely a real-estate adventure in that for the right person.

Proving that adventure can be closer to home than you might think, Euronews Travel’s Hannah Brown went to the North Sea for a dip in November. It just goes to show that you don’t need to go zip wiring in Costa Rica to break out of your comfort zone.

This is a notoriously chilly part of the English coastline. Hannah braved it in just a swimsuit, sharing her cold swimming wisdom afterwards.

With our daily routines still in disarray, some interesting career possibilities have opened up during the pandemic. Capitalising on the move towards remote working, Croatia opened its first village aimed at digital nomads.

The port town of Zadar, with its thriving markets and glistening beaches, certainly looks like the ideal place to take an indefinite holiday.

6 - This hanging hotel in Peru housed some brave guests

Sleeping under the stars near Machu Picchu might sound like the dreamiest bucket list stay, but how would you feel about doing it suspended 400 metres up a cliff face?

This hanging lodge hotel is accessible only via hiking, climbing and zip wire and guests described the accommodation in Peru as “exhilarating”.

If you think a hanging hotel is brave, check out this daredevil who became the first person to fly in and out of an active volcano.

Wingsuiting is just one of many extreme sports we’ve covered this year. See also:

Bridge jumping in the Bosnian city of Mostar did not begin in 2021; it's a tradition dating back to the 1600s, and cliff diving more broadly has a much longer history.

But this astounding footage had readers transfixed as competitors in this cliff diving contest launched themselves into the river Neretva.

3 - Meet the woman who swam for ten and half hours

Strength comes in all forms, and sometimes bravery is a slow burn. We sat down with Chloë McCardel, who won the world record for the greatest number of English Channel crossings in October.

Now the greatest marathon swimmer in history, she knows a thing or two about resilience.

2 - The new longest train journey in the world

The opening of a new rail route in Laos created a whopping new distance for the longest continuous train journey in the world. At 18,755km, riding from Lagos in Southern Portugal to Singapore will take you around 21 days.

The hypothetical route has not been taken yet, to our knowledge, but it shows the wonderful possibilities of rail travel - an adventure you just wouldn’t get in the air.

With travel an ever-more tantalising and exciting prospect during the pandemic, it's no surprise that searches for ‘bucket list trips’ soared by more than 300 per cent.

Ending as we mean to go on in 2022, check out these amazing adventures - from flying in a colourful hot air balloon through the skies of Turkey, to witnessing the beautiful natural wonder of the Northern Lights.