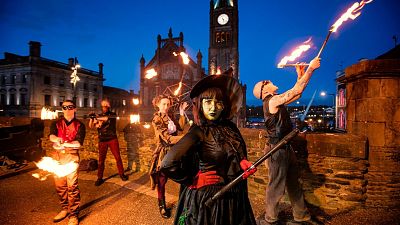 Walled cities have been a symbol of civilisation for thousands of years - protected against wilder forces outside that were unable to be controlled.

Situated in the North west of the island of Ireland, Derry’s walls have guarded the historic city of Londonderry for over 400 years, making it the only remaining fully walled city in Ireland, and one of very few left in Europe. In that time, the walls have acted as a line of defence, a stage for theatrical productions, a route for walkers and a huge outdoor art gallery.

The city is situated along the River Foyle which can be crossed by the Peace Bridge allowing pedestrian access to both sides of the river. The bridge marks a 400-year-old physical and political gap between two sides of a once, bitterly divided community.

Derry has found new fame in recent years as the setting for comedy TV series, Derry Girls, which tells the story of a group of local girls growing up there.

But did you know that it’s also famous for Halloween?

It comes as no surprise that Derry’s long history, and its famous walls, have led to it becoming ‘the Halloween capital of the world’. The celebrations draw on Derry’s rich mythical, creative and cultural history, which stretches back through the paths carved by Halloween travellers over hundreds of years.

The first “modern” Halloween event in the early 1980s was a very small, localised affair but it has grown to attract many thousands of people to the streets of the city.

This year, the Samhain celebrations of story-telling, mischief, feasting and hospitality will be showcased both inside and outside the walls. Samhain is a Gaelic festival marking the end of the harvest season and beginning of winter or "darker-half" of the year.

The city comes alive for the festivities which this year take place outdoors in five distinct 'worlds' so as to allow for any social distancing requirements.

As the chilling winds rise from the sea to greet her, Cailleach - Queen of Winter, Goddess of the Cold and Winds, will lead visitors through Samhain storytelling and the ghost stories that haunt both our World and the World Beyond The Walls.

4. The City of Bones, Guildhall Square, The Diamond

Prepare yourself to meet Walter de Burgh and his ancestors as they haunt the confines of the Walled City, turning it into their very own ‘City of Bones’.

With installations and guises to chill even the coldest of hearts, the spirit of this starved knight will be welcomed by the people of Derry as they embrace Samhain.

As the veil between our world and the ‘other worlds’ is pierced, the days of Samhain and Halloween open the door for an Awakening.

There are portals to cross between the worlds, crowds eager to move through the Samhain Circle gather and spirits hovering in no-man’s land, waiting.

Nothing is what it seems as you enter the dominion of Phantom Queen Morrigan. Welcoming you with dancing flames and hypnotic, mesmerising displays, luring you into the depths of the forest.

Beware of paths lined with shape-shifting creatures and shadows that disguise whatever Queen Morrigan desires.

1. The Ancients and The Battle Cry, Derry/Donegal

Strategically positioned between Derry and Donegal is the ancient heritage site of An Grianan of Aileach Fort.

Among the many legends linked to An Grianan Fort is the story that the ancient Red Branch Knights of Ulster (An Croabh Rua) lie sleeping in full battle armour under the hill, ready to ride forth at Ireland’s moment of greatest need.

Be prepared as they ready themselves to ride forth to Swans Park Buncrana, where you can experience legends, lore, and characters associated with the Red Branch Knights, imagining how they might walk again twixt Foyle and Swilly on Halloween night, telling and reliving their stories.

The famous fireworks which are launched from pontoons in the river allow spectators to enjoy the sight from all over the city. During the festivities, even the much-photographed Derry Girls mural gets a spooky make-over!

Accommodation in the city also gets in on the action with events and staff in fancy-dress.

The Bishops Gate Hotel, housed in an 1800s building close to the city’s courthouse and cathedral, is an ideal place to rest your head after a scary night on the town.

Local pubs also put on a show, the toe-tapping sound of Irish traditional music pours out of the Gweedore Bar and Peader O’Donnell’s in the city centre.

The Walled City Brewery has a great menu with local produce and offers a Beer masterclass where visitors can sample ten of their craft beers matched with snacks.

It's little wonder visitors leave the city thinking it is “Legenderry”.