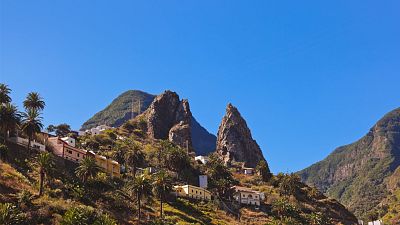 I was probably driving a little too fast when the traffic lights turned red. It was the first straight stretch of tarmac I had seen for a while, having just spent the last forty-five minutes cautiously navigating a series of nerve-jangling hairpin bends that would fit right in at the Monaco Grand Prix.

After being halted a further three times it eventually clicked that these lights dotted around La Gomera, the second smallest Canary Island, are not there to manage traffic flow, and they aren’t used to let people cross the road either. They’re there to remind you to slow down.

Welcome to one of the Canary Islands’ most remote isles

Like the other islands in this archipelago, La Gomera is a beautiful result of ancient volcanic activity. It does, however, remain a far cry from its lively neighbour Tenerife – an isle with one million residents famed for its nightlife and sprawling resorts – mostly owing to its modernly-chaotic deep ravines (known locally as “barrancos”) and valleys which were adapted for agricultural purposes. Just 20,000 people call this island - which is around 22km in diameter - their home.

La Gomera’s topography is so difficult to traverse that the inhabitants even developed their own whistling language: Silbo Gomero. The idea was that the locals (namely farmers) would have been able to communicate important messages between themselves, even if they were several kilometres apart. Whistling reverberated off the island’s deep gorges and travelled much further than shouting.

By the 1950s, modern technology advancement, such as mobile phones, pushed Silbo Gomero near extinction. It is seldom used in everyday life, but remains UNESCO protected and since 1999 has been a compulsory subject taught in schools.

Untouched by the modern world

As you can see, this island has always had a penchant for the unconventional. To this day it remains a chunk of land in the Atlantic largely untouched by the modern world: there’s no McDonald’s, no Starbucks and you won’t find any other global corporations advertising on roadside billboards either. There are no nightclubs, boat parties or huge hotel resorts; instead there are walking trails, natural rock formations and a subtropical rainforest.

Unlike Tenerife’s carousing vibe, on La Gomera there are continual reminders to slow down around every bend. Lookouts (“miradors”) offer brief respite from the snaking roads like those between the island’s capital San Sebastián and the hippy beach town of Valle Gran Rey (the latter of which, by the way, is one of Europe’s finest sunset watching spots).

Things to do on La Gomera

On La Gomera you’ll also find more than 600km of walking trails for all abilities: the entire island is a biosphere reserve. Its main attraction is its rainforest, Garajonay National Park, a rare southern European example of a laurel forest with El Cedro Forest at its heart. Due to climate change this type of sweeping vegetation has all but been wiped out in Europe, apart from on some Macaronesian islands.

Garajonay provides the perfect walking climate; centuries-old tree canopies protect you from the blaring Canarian sun, while the constant drip-dropping of cloud precipitation keeps you cool. Now firmly a tourist attraction, these walking trails are well-trodden as they were once used by locals who lived within the park – trek through El Cedro Forest and you may just stumble upon the quaint white chapel Ermita de Lourdes, where, believe it or not, some people still get married.

Those looking to cool down even further should head for the island’s famous black-sandy beaches. La Gomera boasts three Blue Flag beaches (Alajeró in Santiago; La Cueva and San Sebastián in San Sebastián) where it’s possible to swim in the sea all-year-round. Some beaches, especially those on the north of the island, generally aren’t safe to swim in as the Atlantic is too wild – though there is an outdoor swimming pool in Hermigua.

Amazingly, just one per cent of all visitors to the Canary Islands make it to La Gomera. This wild, natural isle continues to be free of mass tourism and is therefore the ideal place to detach yourself from the real world, take it easy and slow down… even if you need the traffic lights to remind you.