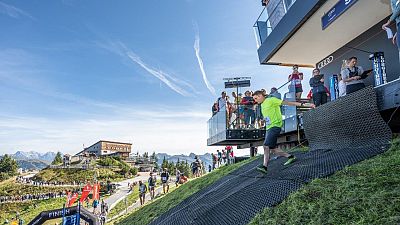 Runners start the race from the Starthaus at the top of the Hahnenkamm ski slope   -   Copyright  Michael Werlberger
By Hannah Brown  •  Updated: 07/10/2021

The Hahnenkamm in Kitzbühel is home to one of the world’s most famous ski slopes, the Streif. With a gradient of up to 85 per cent it’s regarded as the toughest downhill in the world.

And so naturally, runners being runners, thought they should give it a go too, minus the snow.

Britta Sendlhofer, the marketing manager at Inov-8 helps to run the event and has competed in it several times.

“People think running downhill is easy but [it’s] equally breathtaking [as uphill], especially when it's so technical and demanding on the body and your thighs will start burning,” she explains.

The race begins at the Starthaus on top of the Hahnenkamm. Before leading participants through the slalom gates, down the incredibly steep and rough terrain and finally taking them over the infamous mouse trap jump to the finish.

“These mountains are so green and so lush and so beautiful, it’s really fun to run here,” says Brian Metzler, one of this year’s competitors.

For the 2021 race, the organisers transformed it into a team event. Each team is made up of two runners. The first of the pair does the original downhill run, and then their partner is faced with the challenge of running back up the gruellingly steep slope to the Starthaus.

The event is sponsored by Inov-8, a running brand based in England’s Lake District.

“We want to show what fell running is like outside of the UK and the Hahnenkamm offers a great opportunity to let people experience the thrill of running downhill, but also how demanding it is, how fearless and committed you have to be.”

Kitzbühel is in the beautiful Austrian Tirol, part of the Alps.

Despite its size, the small town is world renowned for its annual downhill Hahnenkamm ski race. Outside of ski season, it’s become popular with all outdoor enthusiasts for it’s beautiful hiking, cycling and running routes.

As well as offering outdoor sports, Kitzbühel is a beautiful medieval town, full of fashion boutiques and local crafts.

Kitzbühel is easy to reach as it’s only around 90km east of Innsbruck, 80km south west of Saltzburg and has good transport links with Munich.

**Watch the video above to see the race in action. **