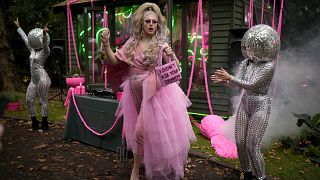 Quintessentially British, the RHS Chelsea Flower Show is known for attracting visits from members of the royal family, aristocracy and horticultural enthusiasts.

This Monday, however, for the grand opening of the annual garden show, noble guests were joined by a cast of colourful characters including drag queens, celebrities and DJs.

A known gardening lover and patron of the RHS (Royal Horticultural Society), Queen Elizabeth II was notably absent for the first time since 2005 as she is staying at Balmoral in Scotland until October.

Held on the grounds of the Royal Hospital Chelsea, in London, the RHS Chelsea Flower Show, which usually takes place every May was delayed until September this year due to the Coronavirus pandemic.

The Chelsea Flower Show will be open to the public until Sunday 26th September, however, the RHS is hosting additional virtual events for people unable to attend in person.