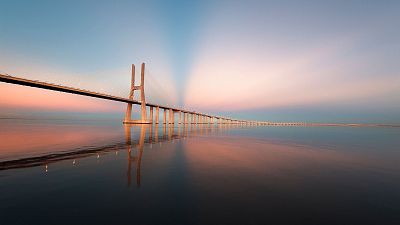 In 2018, UK Prime Minister Boris Johnson made public his support for a transport bridge that would connect Northern Ireland to Scotland.

Overall, it would likely measure around 20 miles (32 kilometres) making it 15 kilometres short of the longest bridge over water.

The ‘Irish Sea Bridge’ and ‘Celtic Crossing’ are just a couple of the names currently being thrown around for this ambitious proposal.

The ‘Irish Sea Bridge’ and ‘Celtic Crossing’ are just a couple of the names currently being thrown around for the proposal.

Immense geological and environmental challenges in this part of the world, however, mean that this could be one of the most technically difficult projects in engineering history. One example given by Johnson during a Channel 4 interview was the threat of ‘leftover WW2 munitions in the Irish Sea’.

Why does the UK need a bridge between Northern Ireland and Scotland?

It’s a good question and we’ll only whisper Brexit at this stage. But the proposal was first floated around three years ago as a way to improve domestic connectivity in the UK. It would take the strain off flight and train services between the countries.

Apparently plans for some kind of link - either a tunnel or a bridge - between Northern Ireland and Scotland go as far back as the 1890s.

How much will it cost?

This really depends on the route taken. There are currently two under consideration: one which would link Torr Head to Mull of Kintyre (cheaper and shorter but with poor transport links either side) and the second between Larne and Portpatrick. The projected cost of the latter option is a staggering £15 billion or €17.5 billion.

Connecting the two countries is likely to come with an even more substantial price tag though, with a figure of £20 billion (€23 billion) more commonly mentioned in discussions about the project.

But what about the famous British weather?

Neither Scotland nor Northern Ireland are especially well known for their temperate climate. It has already been noted that the bridge might be closed at certain points in the year due to poor weather.

That’s why UK Transport Minister Grant Shapps told the BBC earlier this year that the project is more likely to be a tunnel than a bridge. It has also been suggested that rail infrastructures in both countries would need to be improved to support traffic volume either side of the link.

Where are the other big bridges?

While no doubt ambitious, this project will by no means result in the biggest bridge the world has ever seen. The current global top three include:

While these aren’t all across water, the Celtic Crossing bridge is unlikely to take that crown either. According to Guinness World Records, the Hong Kong-Zhuhai-Macau bridge claims the title of the longest sea bridge in the world. Of this 55km crossing over the Pearl River Delta, about 48km sits above the water.

Which 7 UNESCO sites could soon be put on the ‘danger list’?