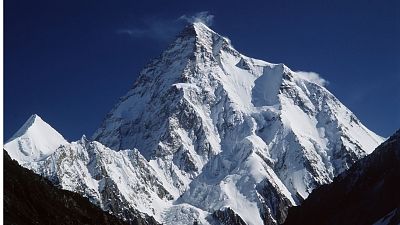 Four teams of mountaineers have set out to make history by being the first to summit K2 in winter   -   Copyright  Getty via Canva
By Laura Sanders  •  Updated: 09/01/2021

A group of sixty mountaineers from around the world are battling the elements in a bid to become the first to successfully summit K2 during winter.

K2 in Pakistan is the second-highest peak in the world, and remains the only summit over 8,000 metres (known as the death zone) to never have been successfully climbed during the treacherous winter season.

The climbers make up four teams:

They started the climb in mid-December and it is expected to take them until the end of February to complete, if weather conditions are favourable.

The expedition includes some reputable Europeans, including the Spaniard Sergi Mingote. His ambitious plan to climb all 14 of “the 8,000” (a mountaineering term used to describe all of the world’s summits over 8,000 metres) without supplementary oxygen in less than 1,000 days were scuppered by the pandemic. And so he’s joined the team in their attempt to make history on K2.

American mountaineer and specialist blogger, Alan Arnette, is there documenting the expedition. In his latest update, he said the climbers were able to reach camps 1 (6050 meters) and 2 ( 6,700 metres) on 3 January for an acclimatisation before bad weather moved in. This meant they had to descend. All four teams were back at Base Camp by 6 January waiting for the next “weather window”.

Only a handful of winter ascents have been carried out since the first attempt in 1987. Dutch mountaineer Arnold Coster, who joins the teams on K2, says people being stuck in COVID-19 lockdowns is partly the reason for this expedition "People had plans for the year and they couldn't go anywhere," he says. "We've kind of been out of a job for a year and now a lot of people want to do something."

This seasoned mountaineer resides in Nepal, co-leading expeditions in the Himalayas.

Why is K2 called the 'wild mountain'?

Nicknamed the ‘wild mountain’, the winter winds on K2 can blow at more than 200 km/h and temperatures can drop to -60 °C.

Climbed for the first time in 1954, K2 will not be easily defeated. Last summer, which is the traditional mountaineering season there, only 450 people reached the summit, while more than 80 people sadly lost their lives. Nobody has yet managed to climb above 7,650 metres during the winter.

Due to its geographical position, which is the most northerly of "the 8,000", the atmospheric pressure is lower and the air therefore even thinner, making the ascent very technical.

What challenges will they face?

"Several factors have to converge for someone to have a chance of reaching the top," observes Arnette, referring to the ability to acclimatise, stay healthy, manage personalities, and avoid avalanches or landslides.

The mountaineers will have the help of fixed ropes, installed by the sherpas, who will also help the foreign climbers acclimatise to the altitude.

Different members of the team possess different talents. Nepalese mountaineer and former Gurkha, Nirmal Purja, is leading one of the teams. He has the talent and the determination to make it, but lacks experience in winter conditions.

The varying ambitions of the individuals could also threaten the mission. Some will want to go it alone, others will value the help of sherpas. There are also likely to be differing opinions on whether to use supplementary oxygen or not.

According to Karrar Haidri, Secretary of the Alpine Club of Pakistan, most of the climbers hope to reach the summit without supplementary oxygen.

Are these mountaineers truly prepared?

"We have a lot of different people, with different ideas and it’s difficult to manage all these different ideas", admits Coster. "But from a workforce perspective, if people work together, we have a better chance."

"if people work together, we have a better chance."

Mingma Gyalje, a sherpa who has climbed 13 of “the 8,000” including K2 twice, attempted to summit it last winter. But he had to give up before he completed the climb and is back to try again with two sherpa friends.

Gyalje admits he wasn’t prepared for the cold last year but he said he had learned his "lesson" and this time round he is ready for it. However, he admits he has some concerns about the size of one of the expedition groups - the Seven Summits Treks group, which has 49 people.

"I don't think it's a good sign to have too many people, too many clients. Because it puts pressure on the management," he warns. "There are people who do not want to come back without the summit."

Several renowned climbers echoed his concerns, believing that many of those present on K2 this winter are not sufficiently prepared.

"Almost everything will have to go almost perfectly, and this rarely happens on a summit of 8,000 metres, let alone on K2."

However, Arnette believes that with this high number of contenders, "the chances are good that at least one person" will succeed. But he warns, "almost everything will have to go almost perfectly, and this rarely happens on a summit of 8,000 metres, let alone on K2."

The best hiking spots in Europe to reconnect you with nature