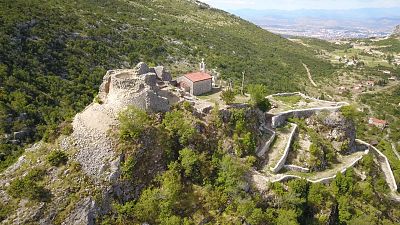 If you could travel back in time which period would you go to? The Bronze Age? Medieval times?

The Crossroads of Civilisations are regional cultural walking routes that will provide visitors with an authentic look at the emergence of civilizations in this area, their impact and how they have shifted over time.

The routes, which traverse Western Balkan countries, offer a glimpse into a multitude of different periods.

They bring together history and heritage in five key narratives, so visitors and locals alike can take a look at one of the world’s most diverse areas.

That’s the Balkans for you - a crossroad, or a meeting place, if you wish, where east meets the west and you can see it everywhere, even in our food

Here's a rundown of the five walking routes:

1) Where It All Started

This route takes you back to the region's antique roots. It allows you to see and appreciate the traces left behind from the Bronze Age, as well as the Greek, Roman and Byzantine periods.

The protective mountains that characterise this region have kept the remains of these ancient civilisations safe, bringing legend and history together to tell a story.

The sites on this route include Apollonia, Butrint and Antigonea in Albania, Daorson/Stolac in Bosnia & Herzegovina, Ulpiana in Kosovo, Doclea, Risan and Budva in Montenegro, Heraclea Lyncestis, Stobi and Kokino in North Macedonia and Gamzigrad, Viminacium, Lustiniana Prima/Caričin Grad and Lepenski Vir in Serbia.

This route pays tribute to the medieval period in the Western Balkans.

Influenced by the Catholic and Orthodox Churches, the region is also dotted with fortresses from when it found itself embroiled in the conflict when the Roman Empire split.

The route is designated to show how these churches influenced the formation of the Medieval Slavic and Albanian states and their fall under the Ottoman Empire.

The sites on this route include Berat, Gjirokastra and Kruje in Albania, Jajce and Travnik in Bosnia & Herzegovina, Prizren, Vushtri/Vučitrn and Peja/Peć in Kosovo, Kotor, Bar and Svač in Montenegro, Ohrid and Skopje in the Republic of North Macedonia and Bač, Stari Ras and Smederevo in Serbia.

The Ottoman Empire also left its mark on the Western Balkans from the late 14th century until the early 20th century.

This is highlighted in the Sultans Rumelia route that gives visitors an intimate perspective of Ottoman architecture and its influence on music, food and culture.

Its title, Sultans Rumelia, comes from "Rumelia Elayet" - the name given to the parts of this region held by the Ottoman Empire.

4) The Dream of Emperors

Another must-see is the Dream of Emperors route, which depicts the Western Balkans' Austro-Hungarian cultural heritage.

The route gets its name from the fact that the region was for many emperors and empires a goal or dream and they wanted to conquer, as it was considered vital for expansion.

The Habsburg monarchy, a precursor to the Austro-Hungarian empire, reached the shores of the rivers Sava and Danube by the early 18th century.

They tried to create a permanent presence in the region, succeeding after 1878.

This route is for those who prefer to keep two feet in the present, celebrating the contemporary culture of the region’s six dynamic capital cities.

It marks the last offering from the Crossroads of Civilisations, whose five paths truly offer an in-depth look at the Western Balkans' culture and history.

The trails in the Western Balkans worth the trek