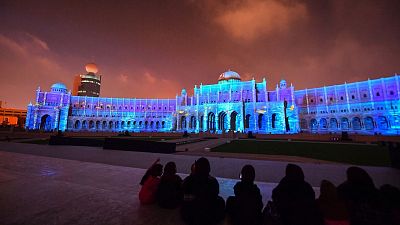 The Municipality Headquarters is lit up in a colourful display for the 10th annual Sharjah Light Festival in the Emirate of Sharjah   -   Copyright  AFP
By Jacqueline Steele  •  Updated: 07/06/2021

When you think of the United Arab Emirates, the glitzy, wealthy, almost futuristic cities of Dubai and Abu Dhabi will likely spring to mind.

After all, Dubai has an indoor ski resort in the centre of a mall, the world’s tallest building, a performing fountain and some of the most exquisite hotels and restaurants on the planet.

While the capital Abu Dhabi is best known for its grand prix circuit and Ferrari World theme park - the home of the fastest rollercoaster in the world - the new additions, including the Louvre and soon-to-open Guggenheim museums on Saadiyat Island (which means Island of Happiness) have placed the city firmly on the cultural world map.

But as a tourist visiting the UAE, the glitz and glamour is just one small part of the big picture.

Beyond the 16-lane highways, opulent brunches, helipads and Lamborghini police cars, lie the country’s five other lesser-known emirates, each strikingly unique and fascinating in their own ways.

Historically known as the Trucial States, each of the seven emirates have their own rulers, maintain a large degree of autonomy in many respects, and for the traveller, offer an insight into the region’s diverse history, culture and natural resources.

An hour and a half drive away from Dubai, Fujairah is known for its beaches, brilliant scuba diving and snorkelling spots.

It is the only emirate which is almost completely mountainous, meaning it’s full of stunning wadis and springs, perfect to ‘wadi bash’ in 4x4s. Fujairah has a very laid back feel and appearance, in contrast to Dubai and Abu Dhabi, with peaceful beaches along 70km of coastline, it shares its northern border with Musandam - an exclave of the Sultanate of Oman.

It is home to the Sheikh Zayed Mosque with its towering white minarets and overlooking the city is the restored Fujairah Fort, believed to be the oldest fort in the UAE and now part of the Heritage Village, which provides a glimpse into how life used to be.

In the capital Musafi, you’ll find the Friday Market (actually open daily), which has maintained the feel of an ancient souq selling fresh, locally-grown produce, carpets and ceramics.

The cultural heart of the UAE, Sharjah’s diverse range of museums offer something for everyone and it is also home to an astonishing wildlife park which is the largest home for rare animals in the Arabian Peninsula.

A dry state with strict sharia laws which extends to tourists and hotels, it is illegal to buy and consume alcohol here.

But despite having some of the stricter rules of all the emirates, this is a hugely family-orientated region, just 30 minutes outside of Dubai by car. Located in Sharjah Desert Park, Arabia Wildlife Centre’s resident endangered animals include the Arabian Oryx and the leopard.

For the visitor it is a complete indoor, air-conditioned experience - this includes the bird aviary, set in an inside wadi and desert environment. You literally walk through an enclosure of indigenous birds. Sharjah Science Museum is another must-do for visitors with hands-on interactive displays and experiments focussing on the laws of nature, thermal physics, physiology and aerodynamics.

There’s also an aquarium, a classic car museum, an art museum, the museum of Islamic Civilisation, and you can even cool off in the Rain Room - an installation which invites you to walk through a downpour of continuous rain without getting wet, thanks to the detectors - although you do actually get a bit soggy.

Often abbreviated to RAK, there is an international airport here and it has become a popular getaway for expats and Emiratis, with luxury hotels including the Waldorf Astoria, DoubleTree by Hilton, and the Ritz-Carlton.

Only an hour from Dubai by road, it is the perfect escape from the city - with magnificent landscapes, picture-postcard coastlines and desert planes, this is where you’ll find authentic Arabia.

Thrill-seekers can enjoy the world’s longest zip line, Jebel Jais Flight (2.83km long), the region’s first commercial Via Ferrata (climbing path), and golf fans have two championship course to choose from. Go for a walk along Al Qawasim Corniche, or lace up your trainers for a run along the jogging track next to a natural mangrove.

Dhayat Fort is the only hilltop military tower left standing in the UAE. You can climb the hill and soak up the view of palm gardens, the Arabian Gulf and the Jebel Jais mountain range.

Completing the seven emirates are these miniature two, not widely known for their tourism, but certainly worth a visit.

Ajman, a 30-minute drive from Dubai, is the smallest of the seven and boasts Ajman Fort - once the frontline of defence, it is now a museum housing historic weapons and tools. While the Al Zorah District is home to a new development of luxury hotels set amongst a protected mangrove forest.

Umm al Quwain, 45 minutes away by car from Dubai, is where you’ll find Dreamland Aqua Park, which has been delighting tourists for years.

Al Ain fort, which was the centre of government in the emirate until 1969, now houses the national museum, including artefacts from Ed-Dur, dubbed ‘one of the most significant lost cities of Arabia’.

Umm al Quwain also has an abandoned Ilyushin IL 76 aircraft in a field, somewhat randomly. The Soviet-era aircraft has been an odd but familiar landmark in Barracuda Beach Resort for more than two decades, with birds nesting in its wings as it slowly sinks into the sand.