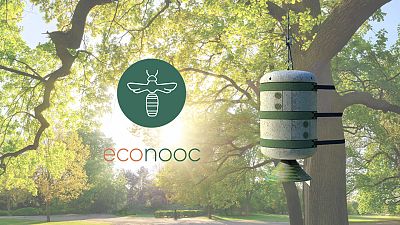 More than 30 per cent of Irish bee species are threatened with extinction, according to the National Biodiversity Centre. More than half of the country's bees have undergone a substantial decline since 1980.

So, what can we do about it? Euronews Green spoke to young designer, Niamh Damery about how she's trying to save native bees.

Part of the reason that bee populations have undergone such a rapid decline is the rise in imports of international bees, she explains. Many of these strains, like the Buckfast bee, for instance, are cross-species of different bees and are often artificially produced.

Originating from totally different climates, these bees and others, like the Italian bee, are used to much warmer weather. They can’t survive the Irish rain.

Why does this matter for local bees?

The Irish black bee is being affected by excessive imports. This is because the new strains mate with native bees, producing new generations that can’t cope with the weather.

“You want the strongest bees to populate... by bringing in others you’re giving them a lesser chance of surviving,” explains Niamh.

This is where econoc steps in.

Niamh built a hive that’s designed to help save the native bee population. It’s not going to specifically reject international bees out but is “focused on conserving black bees”.

The idea behind econoc is to enable more people to get involved in bee conservation that mightn’t have had the opportunity before. It’s for the “people who don’t have time or money for beekeeping.”

The more people conserving bees locally, the better it is for native populations as a whole.

When it’s launched, beekeepers will either bring local black bees to customers, or the hive will attract a population of its own.

How is it made?

The hive is made from mycelium which comes from the roots of mushrooms. These are called spores and need a substrate to grow.

This substrate can be found from all kinds of material that get thrown away like hay or woodchip which can be collected from farmers or carpenters in the area.

When the spores are mixed with the substrate, they attach the sawdust material together and grow, with a nutrient’s help. Flour or even porridge can be used to start this process. The ingredients get put in a plastic bag and left to work mycelium magic.

The mix is put into a mould that mimics a natural beehive but with some additional features. One is a specifically designed landing shelf, so people can see the bees that are going into their hive and learn from them.

The hive is as sustainable as possible and will even be strapped to trees using old seatbelts.

Because the process can be tricky and not everyone has the time for it, the hives won’t be fully grown by customers, at least at the beginning.

When it’s on the market, consumers will assemble it themselves but the growth will be left to the experts for now.

The econoc hive is only part of its project. Really, “it's about educating people about their gardens and biodiversity.”

Niamh has also designed a calendar to come with the hive. Every month features pictures of local flowers that need pollinating to support the region’s biodiversity.

When can we buy it?

Last year, Niamh was shortlisted in the world top twenty for the James Dyson Design Awards in the sustainability category.

Although econoc didn’t win in the end, it’s on the cards for the coming years - if she can secure the funding.

Wildfires in Sardinia likely to have killed 30 million bees