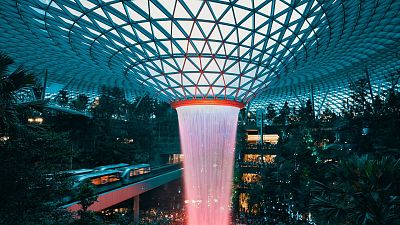 Hey, what are all those big fancy guns doing in the middle of Athens International Airport? Don’t worry, they’re behind a glass case—part of an exhibit to commemorate the bicentennial of the 1821 Greek Revolution.

Like many airports these days, the one in Athens is full of art and cultural treasures that speak to the ability of the modern airport to transport both minds and people. There’s a growing number of airports where actual artworks are very much on display, and that’s by design.

Sometimes airports install items that are representative of the destinations they actually serve: sections of ancient mosaics at Rome’s Fiumicino International Airport and a sampling of Dutch Masters’ paintings at Amsterdam’s Schiphol, for instance. Then there are times when airports go into full-on art gallery/modern art museum mode.

Here are some airports around the world where you’ll find inspiring art on show.

It’s no secret that to find some of the most architecturally innovative airports you should look to Gulf countries such as Qatar. Doha’s Hamad International Airport has a rotating collection of cutting-edge contemporary art curated by Qatar Museums.

We’re talking big installations, like the colossal yellow Lamp Bear by Urs Fischer (after departures security and passport control at South Node) and Arctic Nurseries of El Dorado by Marc Quinn; more recent additions have been Jean-Michel Othoniel's Cosmos, for which the artist drew inspiration from an ancient Islamic astrolabe.

The swirling metallic work is located at the North Node between D and E concourses. Tom Classen's "8 Oryxes" are in Arrivals, and then there's the very large Small Lie by the artist KAWS, a wooden "toy" looming 32 feet over busy passersby in the North Node.

The Eternal City is a treasure trove of ancient art, so it’s no surprise that at least some part of Rome’s main international airport should serve as an ambassador of sorts of its artistic heritage. And that place is in the newish Terminal 3, on the upper level of shops and restaurants after passport control.

You’ll find a small but well-curated selection of Roman statues, and a recent installation featured a beautiful array of mosaics—part of a mythological depiction of signs of the Zodiac and the four time zones, or the four seasons.

Cyprus’ largest international airport showcases modern installations of artworks after customs and immigration. But what’s really cool is a chunk of an artsy wall decoration that was somehow salvaged and relocated from the now-defunct airport near Nicosia, the capital.

Nicosia International was the island’s main international airport before Turkey invaded Cyprus in 1974, and now that disused airport sits in the middle of a UN-monitored buffer one.

A post shared by Larnaka and Pafos Airports (@cyprusaeropolis)

As for this well-preserved relic, it was specially commissioned back in the early 1970s. New information panels explain the meaning behind the different mosaics that make up the wall segment, which is prominently located in the departures hall before security.

According to its website, the Israel Airports Authority “views art as an indispensable part of the history and culture of the Jewish people”, and at Tel Aviv’s busy Ben Gurion Airport that commitment manifests itself in various ways.

Most iconic is the beautiful and large ancient “bird mosaic” from the historic Israeli city of Beit She’an. It’s set in a cement mould that is itself affixed high atop a portion of the wall under which every arriving passenger at Terminal 3 (the airport’s main terminal) must pass before passport control.

And since 2008, the elongated left wall of the sloping corridor in Terminal 3 that leads to the main departures hall has been home to temporary photo exhibitions that focus on different aspects of Israel.

It’s not uncommon for passengers to stop in their hurried tracks to check out the oversized photos before heading to their flight gate.

Not surprisingly, awesome San Francisco International Airport steps rup to the plate on the creative front. There are contemporary works of art sprinkled throughout the main terminals; one fabulous recent show was The Modern Consumer — 1950s Products and Style” in Terminal 3.

At SFO as one might expect, art is never an afterthought but rather, is compellingly curated. In fact, the airport’s public art is selected by the prestigious San Francisco Arts Commission. For aviation history buffs, there’s also the Louis A. Turpen Aviation Museum, which has on display everything from vintage flight attendant uniforms to floral-print aeroplane seats from the 1970s.

Admission is free to the museum, which is open daily from 10 a.m. to 4:30 p.m. and is located before security on the departures level of the International Terminal Main Hall.

Like many spots in and around the Greek capital, the area around Athens International Airport is rich with antiquities, and many discoveries actually came to light during the process of building the airport. Happily some of these have found a home in a small museum located inside the airport.

While many people who find themselves on the upper level of the main departures hall (before security) are making a beeline to Burger King, some pause to inspect upwards of 172 authentic artefacts dating from the Neolithic and Early Hellenic eras to the post-Byzantine period.

Didn’t have time to gawk at the art at the Rijksmuseum during your visit to Amsterdam?

No worries, because thanks to some artsy interventions at Schiphol you can pretend that you did and maybe even pull an innocent fast one on your Instagram followers.

We’re talking about the busy airport’s pared-down but very lovely nonetheless version of the famous museum, tucked into a glass pavilion after security.

The curated selection of 17th-century Dutch paintings rotates with the Rijkmuseum’s main collection on a regular basis.

All things considered, you could do worse than to be stuck in Philadelphia. In fact, Philly International is one of the more art-smart airports, with a long-established program of rotating exhibits appearing throughout the terminals.

There may be a whopping 20 exhibits to be found at various points in Terminals A through F. How Philly Moves at the Terminal B-C Baggage Claim is a nearly 85,000-square-foot mural that celebrates the city’s dance traditions.

Philadelphia street artist Nosego’s colourful Bodacious graces a section of Terminal F, and yes, we think all this art is pretty bodacious, too.

This teenage pilot is solo flying around the world