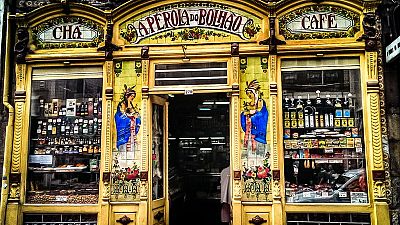 The beauty of a city is not always down to how ornate its museums and monuments are.

Europe is full of creative and colourful shopfronts, selling anything from food and drink to memorabilia, music, or pharmaceuticals.

Often unnoticed as we walk by, these storefronts help bring a city to life with their delicate designs, colourful tilework, hand-painted signs or refined woodwork.

Here are some of our favourites, ranging from more well-known names to independent stores.

The uphill curve and colourful shopfronts of Victoria Street in Edinburgh’s Old Town make it one of the most photographed locations in the city. It’s also said to be the inspiration for Harry Potter’s cobblestoned ‘Diagon Alley’.

One of the most notable shops on the parade is Diagon House, which opened as Museum Context, just in time for the 20th anniversary of the publication of Harry Potter and the Philosopher’s Stone, and is a must for Potter fans.

A Pérola do Bolhão, Porto

Pérola do Bolhão, one of Porto's most famous grocery stores, has been in business since 1917 offering customers a traditional taste of Portugal. Its striking art nouveau facade has become a well-known landmark in Porto. The ‘azulejos’ (Portuguese tin-glazed ceramic tilework) depict and two goddess-like women bearing café (coffee) and chá (tea) plants.

The luxurious pastry shop feels like a miniature royal palace with frescos, mirrors and fine patisserie combining to make an exquisite sensory experience

Neal’s Yard Remedies opened in 1981, focussing on all-natural and organic health and beauty products. It’s just one of the many quirky, multi-coloured shops packed into the courtyard that’s tucked away down a tiny side street in Seven Dials, near Covent Garden.

Drury Buildings is a contemporary Irish restaurant located in the heart of Dublin’s Creative Quarter. Its colourful front, which replicates Berlin’s Graffiti scene, is updated regularly so you never know when it might transform again.

The sunny yellow ‘t Kaaswinkeltje cheese shop in the heart of the old Gouda unsurprisingly looks a bit like the cheese it sells. The original Gouda’s farmer’s cheese you can find there is made according to traditional methods from farms around the area.

The magnificent shopfront is adorned with mosaics representing shells and fish.

Originally a fishmonger, its new owners bought La Boissonerie in 1999 and ran it as a wine bar, before they changed the ‘P’ in Poissonerie, to a ‘B’ and turned it into a gourmet restaurant.

Fortnum and Mason, in Piccadilly, London

One of the oldest still-operating department stores in London, Fortnum & Mason has been in existence since 1707. Today, the Queen’s grocer - which claims to have invented the Scotch Egg in 1738 - provides groceries and tea to royalty.

Located on the city’s Left Bank, the bright blue jazz music shop sells a wide selection of LPs, CDs, books and flyers, making it a favourite with the city’s jazz community.

This stunning brocante in northeast Switzerland is undoubtedly one of the chicest shopfronts in Europe.

Run by the Schärers, with the help of their Norwich Terrier Lilly, Trudy & Vinz has the look and feel of a traditional French Broconte - complete with work from local artisans too.

Sadly the gorgeous shopfront was vandalised this month during a protest in the town, leaving Trudy & Vinz temporarily out of order. But while they undergo repairs, you can still follow them and admire their aesthetic on Instagram. Plus, their dog has an Instagram account of her own too - which is well worth a follow.

The new museums and galleries you need to visit after COVID