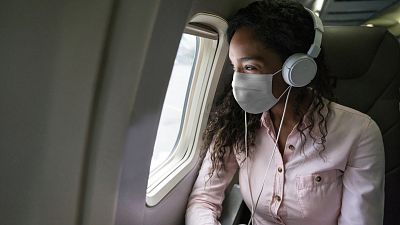 They are on an unconventional sight-seeing tour run by Ukraine Airlines International, with flights lasting one hour and flying in a circle over the city.

Attractions include the Dnipro river, the ghost town of Prypyat, Chernobyl's notorious power station and Gostomel airport which is home to one of the world's biggest aircraft.

Like so many around the world, Ukraine's airlines have been hit hard by the pandemic.

National passenger traffic plummeted by 64 per cent last year according to the country's Centre for the Transport Strategies.

The sight-seeing flight is a way to keep staff working and prevent all the aircraft from being permanently grounded.

Passengers are so far enthusiastic, with Olha Skubenko saying: "As many countries are closed now, it's impossible to travel. So it was a great idea to take a flight over Kyiv at least. It was interesting."

Maksym Shakhalov adds: "It was very cool and funny. Unfortunately, the weather was not so good, and we haven't seen all that was planned.

“But the pilots were very funny and told many interesting stories. That made it good."

Watch the video above to see the ‘flight to nowhere’ in action.

The 6 airlines with the highest COVID safety ratings

What are the newly-announced travel restrictions in Europe?

Could a traffic light system get UK travelling internationally again?