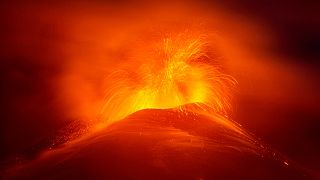 Recently, the volcano has been more active than average, with 16 eruptions over the past five weeks.

The latest explosion, which occurred overnight between 23 and 24 March, lasted twice as long as usual and happened on the back of a brief four-day hiatus.

Is this intensive activity unusual for Mount Etna?

Mount Etna on average sees around 200 eruptions per year, a number which has increased in recent decades. Currently, it’s in the middle of several paroxysmal eruptive explosions, with this latest beginning in the evening and lasting throughout the night.

Since 11pm yesterday, it’s been reported that the explosions merged into sustained lava flow for about five hours. Nearby Catania experienced some ash fall, and a few flights were cancelled at local airports (but have since resumed).

At this moment in time, the explosion technically isn’t over, with lava effusion continuing to feed two separate flows down the mountainside. To the east, this is descending into Valle del Bove, and to the south, the Torre del Filosofo area.

It’s believed Etna is preparing for another eruption over the coming days.