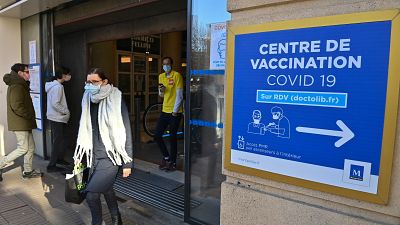 The EU has just announced it will be proposing a plan for 'vaccine passports' later this month   -   Copyright  PASCAL GUYOT/AFP or licensors
By Sarah Palmer  •  Updated: 24/03/2021

As the vaccination roll-out accelerates around the world, many countries are starting to think about how they can enable vaccinated citizens to travel and visit public places such as restaurants and sports stadiums. The EU has unveiled its proposed digital vaccine passport in time for the summer tourism season.

What will it do to help restart travel in Europe?

Vaccine passports - which aren't passports as we know them, but rather a certificate of vaccination - will provide evidence to other countries that a traveller has received full vaccination against COVID-19.

This means that, in theory, people will gain unrestricted access to flights, restaurants, bars, tourist attractions and festivals. It also means quarantine protocols, like locking down for up to 14 days in a hotel, can be avoided.

What is the EU vaccine passport going to look like?

Officially called the "Digital Green Certificate," the pass will be free, bilingual in the language of the issuing member state and English, secure, non-discriminatory, and available in digital or paper formats, both of which will have QR codes, according to von der Leyen.

In order to facilitate "safe and free movement" within the bloc, the Digital Green Certificate will actually comprise three different certificates:

The EU is currently working on verification software to ensure that the approach is seamless across all member states. As well as EU members, the scheme is being opened up to non-EU partners like Iceland, Liechtenstein, Norway as well as Switzerland.

What’s the problem with the passport?

The move doesn’t come without its controversy. It has been feared 'vaccine passports' run the risk of creating separate categories of people in society: the vaccinated and the non-vaccinated. This is being seen as especially unfair to the many countries where it is difficult to access vaccines, with some developing countries predicted to receive doses in 2024. This is the view of the World Health Organisation, along with countries like France and Belgium, who believe the solution could be discriminatory. Countries including Spain, Greece and Portugal, who heavily rely on tourism - especially in the summer - have been more receptive to using vaccine passports.

Last month, Denmark’s government got ahead of the game and said it was joining forces with businesses to develop a digital passport. Finance Minister Morten Boedskov told a news conference that “in three, four months, a digital corona passport will be ready for use in, for example, business travel.”

However, the EU has said the fact that Digital Green Certificate will be interoperable, allowing those vaccinated against the virus and those who haven't to benefit from the scheme, will avoid anyone being discriminated against.

It's for this reason that test and medical certificates are being tied into the project to allow those who can show they are not carrying the virus can also enjoy the freedom of movement.

Green Pass should be ready between May 17 and June 1, says Schinas