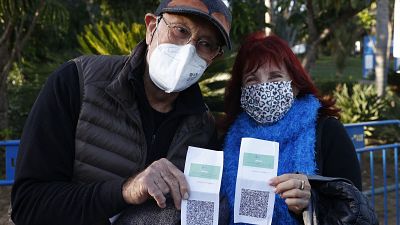 COVID-19 vaccination certificates are being introduced around the world   -   Copyright  JACK GUEZ/AFP or licensors
By Laura Sanders  •  Updated: 30/03/2021

The COVID-19 vaccine is the light at the end of the tunnel after a year of lockdowns and restricted travel. The argument for a vaccine passport came up early on in the pandemic and now, it's becoming a reality for travellers.

Will a vaccine passport be needed within the EU?

Traditionally, people have carried a paper vaccination certificate. But tech firms in the US and Europe have teamed up with The Commons Project to make a universal COVID-19 vaccine certificate accessible via an app. The aim is for CommonPass, which has already been trialed at some airports, to be accepted at every airport in the world.

The CommonPass app is still in trials, but there is an option to be notified when it becomes available.

The EU Commission has just announced it will be outlining a full proposal for vaccine passports in March - just in time for the summer tourism season. The 'Digital Green Pass' - a name coined from Israel's 'green pass' initiative - has the potential to bring a huge boost to the travel industry.

In some countries, such as Greece, visitors with a COVID-19 vaccine are already being allowed to enter without restrictions. But will this mean that those who can’t or don’t want to be vaccinated will always be subject to travel restrictions?

A report published by Exeter University says that while a vaccine passport could allow for the long-term management of COVID-19, it could also cause data protection breaches and allow for countries to determine individuals’ freedoms based on their medical records.

This is the shared view of the World Health Organisation (WHO), along with countries like France and Belgium, who believe the solution could be discriminatory. Countries including Spain, Greece and Portugal, who heavily rely on tourism - especially in the summer - have been more receptive to using vaccine passports.

What if I can’t have the vaccine - does this mean I can’t travel?

The Greek Prime Minister has said he would not ban travellers who haven’t had the vaccine, but those travellers are still subject to restrictions upon arrival in the country, such as taking a PCR test and self-isolating for 7 days. It’s therefore already clear that visitors who are vaccinated against COVID-19 can enjoy certain privileges - such as being able to travel freely without any entry restrictions.

The Exeter study has weighed up the debate and said that while “such measures could preserve the freedoms of those who do not have the disease or have been vaccinated”, others “cannot access or afford COVID-19 tests or vaccines,” and “they will not be able to prove their health status, and thus their freedoms will be de facto restricted."

Which European countries are introducing a vaccine passport?

Several European countries are now introducing exemptions for travellers who hold a vaccine certificate. With tourism taking such a colossal hit from the pandemic, governments are keen to get their economies moving again and they see a vaccine passport as the way to do it.

But the WHO has advised governments not to rush to give freedom of travel to vaccinated travellers.

The WHO committee warned that "there are still too many fundamental unknowns in terms of the effectiveness of vaccines in reducing (virus) transmission and vaccines are still only available in limited quantities."

And UK government officials have advised vaccinated people to continue to follow social distancing measures because they could still carry the virus and pass it on.