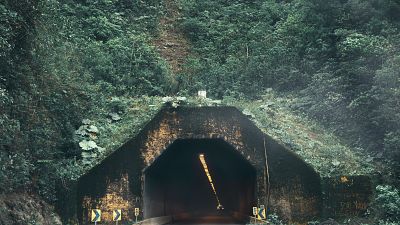 Holidays that don't involve getting on a plane - or any form of public transport - are expected to rocket in the wake of COVID. Although driving might take longer, it gives you the opportunity to really see your surroundings from the comfort of your car.

That being said, if you’re not a confident driver, look away now. Here, we're taking a look at some of the scariest roads around the world - from death-defying drops to cliff-face rock tunnels.

Officially known as North Yungas Road, this route usually goes by its more ominous moniker. Hairpin bends slice through thickly-forested mountain slopes, and there are no guard rails to protect vehicles from the 600 metre drop. Despite the risks, it's a popular one with tourists.

This ancient Silk Road route climbs to the 4,700 metre high Khunjerab Pass, which translates to ‘Valley of Blood’ due to its former popularity as an ambush spot for robbers. While you’re unlikely to fend off a bandit attack nowadays, the route is still fraught with danger in the form of landslides, floods and earthquakes.

An incredible 99 bends (most of them hairpin) loop around this 11 kilometre route over Tianmen Mountain’s vertigo-inducing slopes. If the road itself doesn’t scare you off, take a stroll along the Coiling Dragon Cliff skywalk: a glass-bottomed walkway snaking around the cliffs, some 1,400 metres from the ground.

So dangerous that rental car companies won’t insure journeys made on it, Skippers Canyon Road skims a deep gorge scored by the rushing Shotover River (hundreds of metres below). The road was built by miners in the 1800s when Shotover River glittered with gold.

Blind corners, frequent typhoons and monsoons make this route treacherous. It’s a narrow road carved into mountain rock with frequent low, unlit tunnels (around 450 workers are said to have died during its construction, from 1956-1960). Daredevils are rewarded with glorious views as the road crosses Taroko National Park.

The Pan-American Highway is the world’s longest road and runs through 14 countries. Its highest point is at Cerro de la Muerte (‘Mountain of Death’), in Costa Rica. Here, the steep, rugged drive soars through fog and clouds above lush green jungle. If you’re still eager for more white-knuckle moments, continue down to Ecuador and head along Cotopaxi Volcan Road, a 40 kilometre long dirt track plagued by flash floods and an active volcano.

There are only three villages on this permafrosted, 666 km-long route: Wiseman and the ominously-named Coldfoot and Deadhorse. Dubbed the loneliest road on Earth, it shouldn’t be attempted without survival gear. Visibility is often low thanks to wintry weather conditions ranging from sub-arctic to polar. Plus points, however, include getting to drive into the Arctic Circle.

The Road of Bones, Russia

Do you believe in ghosts? Kolyma Highway was built by gulag prisoners, thousands of whom died building it (hence the name). Their bodies were used in the foundations of the road at a rate of around one per metre. At 2,500 kilometres long, that’s a lot of corpses. Drive along it and you’ll travel over frozen rivers and past blue-tinged snowy forests, home to reindeer and Siberian ponies.

This soaring Himalayan mountain pass links the Kashmir, Dras and Suru valleys with the Indus Valley in the east. Perched 3,528 metres above sea level, its zig-zag route is buffeted by roaring winds, has no guard rails, and is prone to landslides and mudslides. During the winter, heavy snowfall often closes the road.

A challenging route for even the most experienced drivers, the Stelvio Pass takes a winding route over the Alps with steep drops and sharp turns, including a ‘wall’ of 48 hairpin bends in a row. Its scenic views draw crowds – visit outside peak holiday season if you prefer a quieter trip.

The Bayburt D915 Highway is a stack of hairpin bends so narrow that vehicles often need more than a single manoeuvre to turn. The road is poorly maintained, and no guard rails - it isn't recommended to tourists.

The ancient-looking Guoliang Tunnel Road was built as recently as the 1970s. Carved through the side of steep Taihang Mountain, it cuts into several sheer cliff faces – which means that for most of the route, you’ll be inside the mountain. Rectangular ‘windows’ allow light in.

Hana Highway curves around the coast of Hawaii’s Maui Island and has spectacular views over the ocean, lush rainforest, plunging waterfalls and scenic bridges. However, the route is so stressful to drive along that it’s also been dubbed the ‘Divorce Highway’.

Travel restrictions are currently in place for most countries due to COVID-19. Points of interest and attractions may be closed. Always check websites and government advice before you travel.

Everything you need to know about the EU's proposed 'vaccine passport'