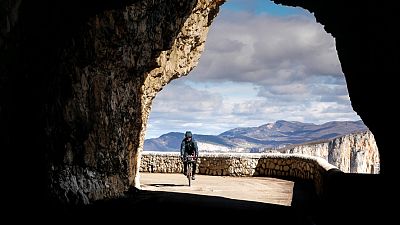 The vertiginous road I’m on twists and turns with a vast limestone cliff on one side and a sheer gorge drop on the other.

Cycling guide, Philippe Join-Lambert, from La Glisse - Velectrip says the balcony roads in France’s pre-alp region of Vercors are considered amongst the most dangerous in the world.

Earlier, along a section of the Tour de France route that passed through the region, Philippe explained that these hair-raising lanes had been cut into the sides of these sheer rock walls using dynamite.

The ride takes in Saint-Nizier-du-Moucherotte, the first commune in the Vercors perched hundreds of meters above Grenoble, where the Northern and Southern Alps meet.

Starting here enabled us to miss out on the grueling Tour de France climb from the city to the eastern edge of the Vercors Massif that straddles the départements of Isère and Drôme.

Those who make the 1,000-metre climb up one of the winding roads are rewarded by deep gorges, limestone cliffs, undulating hills, and huge wooded expanses; a serene alternative to the soaring, gnarly landscape of the Alps and ideal for many different outdoor adventures, from alpine and cross country skiing, climbing, canyoning and wildlife watching.

In the 19th century there were no passable roads for horse-drawn vehicles, so the 5,000 residents of Vercors, feeling increasingly isolated from the rest of the world, decided to build roads to connect Vercors with the South.

Without modern technology to cut into the cliffs, the roads were built by a brave soul hanging down the side of the mountain on a rope ladder and throwing dynamite into the rock, swinging out of the way just in time to avoid being blown up.

Creating this balcony roads “was the first act of tourism here” says Philipe “and why it’s such a stunning location for cycling.”

Before this year the ascent of Saint-Nizier-de-Moucherotte (14.6 km at 6.8%) had been climbed four times on the Tour de France between 1950 and 1989 and our final destination, Villard-de-Lans has hosted the Tour 12 times: six as the starting town and six as the finish.

We stop just before Saint-Nizier-du-Moucherotte, the town would be the 143th km for Tour de France riders, and pay a visit the cemetery where 98 soldiers and French Resistance fighters lie under fine gravel.

The memorial is located on the very site of the Battle of Vercors, which took place between June 13 and 15, 1944, the most famous stand of the Maquis du Vercors, the rural group of the French Resistance who made the massif their stronghold during WWII.

The unadorned cemetery is one of several poignant memorials to these underground fighters and a place of pilgrimage for many.

Phillipe explains that by the 1940s there were only a few roads climbing up from Grenoble to access the massif. Known as ‘the fortress’ because of its dense alpine forests and rugged plateau, it made a natural refuge for the Maquis.

Instead of following the exact route of the Tour de France riders we continued our cycle along an old railway line that used to come from downtown Grenoble up to Villard de Lans.

We pass the Trois Pucelles, three rocky summits that overlook the cemetery. According to legend they were three princesses, who were transformed into stone by Charlemagne.

Just past the Trois Pucelles we spot a steep grassy slope that was once the site of ski jumping events during the 1968 Grenoble Olympic Games.

Then, like the Tour, we descend for about 18km from the top of the plateau into a landscape that opened up into alpine pastures, crisscrossed with gravel paths. It’s riding these paths that’s becoming increasingly popular amongst locals here, says Philippe, who covers at least 200km a week on his ‘gravel bike’ - a cross between road and mountain bike.

Gravel biking, I discover, is a throwback to when riders in the US were not allowed on main roads and had no cycle paths, but lots of agricultural trails. So they took ordinary road bikes and put larger tyres on them, creating something like an 80s mountain bikes with no suspension.

We continue on, past cows, sheep, and people on roller skis, training for winter nordic skiing events, anticipation building for the category 3 Tour climb (with a gradient of 6.8%) to Villard de Lans at 1023m. I’ve really not done so much cycling recently- how will I cope?

By the time we set off from the tourist office at Saint-Nizier-de-Moucherotte, the Tour riders would have already done 150km.

As I reach the 2.2km ascent, Cote 2000 (referring to the ski lift at the mountain top rather than my summit at 1152m) I drop to my lowest gear and begin to grind it out at a snail's pace. I considered standing up and pushing hard on the pedals, but who knows how long this climb is going to go on for?

After 13 minutes I joyfully reach the Balcon de Villard where I can reward myself with photos under the Tour de France Billboard. I’ve covered 27km today, as opposed to the 164 of the tour riders, but still deserve a Blue du Vercors-Sassenage Tartiflette.

I’m sure that’s what stage winner, 24-year-old German Lennard Kämna - who covered it in 4 hours 12 would have done!