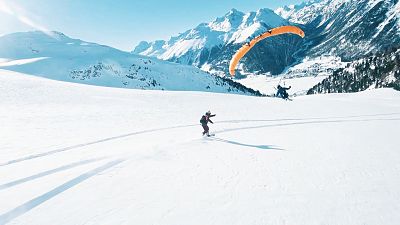 For anyone who considers windsurfing an extreme sport, X-Project has just taken it to new heights in the Swiss mountains.

The X-project, a unique experiment which combines some of the world’s most extreme sports with snow, was originally dreamed up by Christian Mueller, a pioneer in foil sport.

“The X-project was a little dream of mine. For years I've been thinking about how we can do it - windsurfing in powder snow together with kiters, with snowboarders with speed riders,” explains Christian, the reigning windsurf foil world champion, “and we were finally able to realise that – a dream has come true and I just think it's very, very cool.”

The X-project involves a combination of different sports including windsurfing, speed riding, snowboarding, and snowkiting. Set against the breathtaking snowy landscape of the Engadine Mountains in Switzerland, the project was planned over several years.

It brings together some of the world’s best athletes from a variety of sports. The result? Incredible footage of different and unexpected sports in the snow, captured over the stunning mountain range backdrop.

“The X-project for me represents me being creative and coming up with ideas and concepts to - just the evolution of design,” says Levi Siver, one of the snow windsurfers involved.

“I really love surfing, I love riding waves but I love snowboarding too and it’s basically experimentation, having fun. It’s just playing around and feeling the freedom.”

All of the athletes play with the elements of different sports on the final descent of the X-project, among dreamlike images in the untouched nature of the Engadin mountains.

Part of the project involved Levi Siver and Balz Müller drawing an "X" shape into the pristine powder snow slopes, using snow windsurfing gear. Balz was interviewed just before take-off, and said, “I’m always chasing this rush of adrenaline, the speed, the fear of trying something new and I wouldn’t say I’m scared, I’m nervous to try something which I haven’t done before.

“Standing on top of this hill here on Corvatsch with the sail in my hands, it’s an awkward feeling. I am holding my boom, my windsurf boom. I’m so used to it with frozen fingers and I know I need to go downhill which is a scary feeling but at the same time it’s super exciting.”

Press play on the video above to find out how the X-project experiment went.

These pilots are landing on a runway made of ice