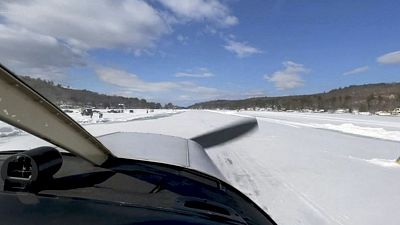 An 800 metre runway spans this frozen lake in Alton Bay, Lake Winnipesaukee, US. It is fully operational - so long as there's an even spread of at least 30 cm of solid ice.

The unconventional landing strip is managed by Paul LaRochelle, who is responsible for the critical task of measuring the ice each morning.

"We won’t drive our trucks out here without having at least 12 inches (30 cm) of ice," explains Paul. "If we have nine inches here, 12 over here, 10 down there, we don’t open. Not until we're even everywhere.

"Last year we did not open because that didn’t happen. It was one of those winters, it was too warm, the ice was sketchy, and it was uneven thicknesses."

The New Hampshire Department of Transportation also helps to manage the runway, in addition to a crew of workers who support LaRochelle.

Maintenance includes keeping snow off the runway, making sure it's completely clear, and ensuring planes take off, land and park safely. It's the only ice runway that’s approved by the Federal Aviation Administration in the continental United States.

Carol Niewola is an employee of the New Hampshire Department of Transportation's Bureau of Aeronautics and an airport supervisor.

"Ice is slippery. We get that a lot from the pilots. Weirdly enough it's like they weren’t expecting it to be slippery, and it is.

"Turning, stopping, those are all really difficult moves that are very easy to do out on paved or grass runways, but here on the ice it can be very different. There is a little bit of snow cover on the ice that gives it just a little bit of grip, but it's not very good."

The runway is predominantly open for smaller crafts, as opposed to full-size commercial flights, which can pull up in nearby Manchester or Boston.

Would you take a flight to the frozen lake? Press play for more.

What is 'extractive tourism' and what can we do about it?

Windsurfing in the snow? Watch pro athletes show us how it’s done