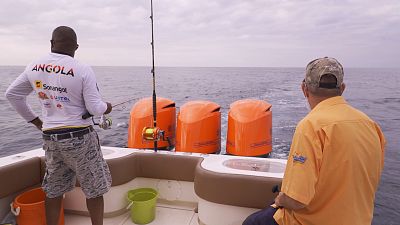 With a coastline stretching 1600 kilometres, Angola is a real paradise for sport fishing. We put the fishing to the test in these rich and unique waters by heading off land with a fishing club and two world fishing champions.

Sitting on the Atlantic coast, Luanda is the perfect place to start fishing whether it's for leisure or competition. The members of the Olé sport fishing team, who are based in the capital, often set off for here.

Nicolás Castaño Mansilla is the Captain of the Olé Sport Fishing Team. He explains Luanda's popularity amongst fishing enthusiasts as partly due to the desire to practice: "we make a huge effort to improve our performance and, actually, we have world championships. We have more than 20 or 25 world records in different categories".

But winning world records requires dedication. The Olé team prepares their equipment meticulously in the evening before their early morning fishing excursions. They're on the sea before 7am and one of their top training areas sits 30 kms northwest of Luanda.

Some of the most known members of the Olé team and the best in the business are José Cardoso, also known as ‘Zé Carlos’. He's a three-time World Champion in sport and deep-sea fishing. There's also Luís Mateus, known globally as ‘Luís Van Dúnen’. He is also a big name.

When winter comes the team often turns to deep-sea fishing for what Nicolás describes as "more quality fishing". One of the many varieties of fish they're interested in catching is Dorado fish. They're also known as Mahi-Mahi or Dolphinfish. They love tropical and subtropical waters.

The Sport Fishing World Champion, José Cardoso, tells us that in Angola they also have a place called Lobito. He says "it is an area that has plenty of fish. Luanda also has lots, sometimes more, sometimes less, depending on the time of year".

"The sea in Angola is good."

Lobito has hosted World Championships and attracts competitors and interest from beyond Angola’s borders. Benguela is also a good spot for fishing. It's an area where cold waters mix with warmer, tropical ones.

Luís Mateus another Sport Fishing World Champion from Angola believes that Angola is really not far behind other top fishing countries like Costa Rica and Cabo San Lucas in Mexico.

But how do you land success in sport fishing?

To José Cardoso the answer is simple. "It is a matter of love for Kianda. When we eat or drink something, we always give to the Kianda, who is our Goddess of the Sea, in who we trust, and who takes us to a good place. We attribute our catches to this".

Sport fishing events are now on hold because of the pandemic. But these fishermen hope it won’t be long before they’re back out there competing against the world’s best once again.