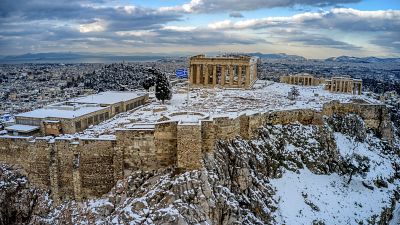 One of the most popular tourist attractions in Greece is covered in snow, following a rare snowstorm.

The Acropolis, meaning “high city”, is the most complete monument from ancient Greece. It’s no doubt seen every type of weather since it was built in 3300 BC. But this is the worst winter storm modern-day Greeks have seen since 2008.

What’s been happening with the weather in Greece?

The historic nation has seen temperatures plummet to - 19 degrees Celsius in the past week, disrupting traffic and delaying COVID-19 vaccines.

Police have reported over 250 calls for help from those stuck in cars and homes. Authorities have urged people to avoid travelling if possible.

But that hasn’t stopped locals from making the most of the rare event, with snowball fights and skiing happening countrywide.

Why is it snowing?

Although the mountain ranges are no stranger to snowfall, the capital Athens is very rarely subject to the treacherous winter weather.

The snow seems to be passing across Europe, as capitals including Paris, Amsterdam and London were victims of the storm last week. In Greece, it arrived over the weekend, but things are expected to warm up as the week progresses.

When is the best time to visit Greece?

Although Greece does tend to see a colder winter, it averages about 7 degrees Celcius in the north, and more like 10 degrees Celsius in the south. Usually the Greek winter is characterised by rain rather than snow.

The weather improves from late April and stays warm and sunny all the way through to early November, making these the best months to visit.

Before the COVID-19 pandemic, 25-30 million tourists flocked to Greece every year. About 1 million of them visited the Acropolis, making it one of the most popular places in the country for sightseers.

Press play to watch, and if you’ve been in Greece during the snow, let us know your experiences on Instagram with #euronewstravel.

8 reasons to put Cardiff on your travel bucket list