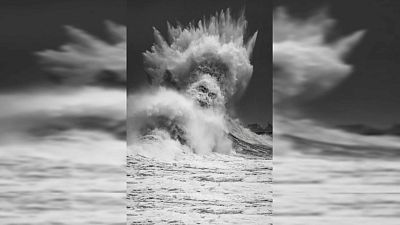 This fleeting moment of mother nature at her most dramatic has captured the imagination of millions on the internet.

About ten photographers were also present on this popular spot for storm chasers, but only Rivrin managed to catch the wave as it crashed into a wall, forming a shape resembling the ill-tempered becrowned god.

"It was raining, the light was low because it was the end of the day. We could see the waves breaking in the distance and crashing on the dike. One of its waves exploded harder than the others. It`s really a fragment of a second."

Rivrin said that when he took the images, the most powerful waves of the storm were striking the French coast.

The photo has now gone viral around the world on the internet, with English, American and Turkish media sharing it.

Rivrin has published several books on Brittany, as well as seascapes from Iceland and Scotland.

Enjoy the best photography of Europe in the snow