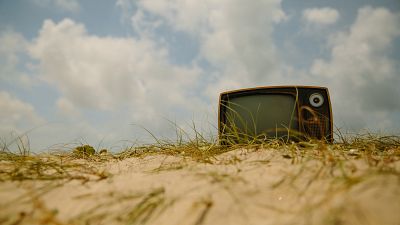 Many of us are in desperate need of a getaway right now. But with lockdown and restrictions getting tighter around the world, travel remains off the cards for the foreseeable future.

The same goes for us here in the Euronews office. The term ‘office’ is of course here used loosely. Currently, our HQs span the globe, from head office in Lyon France to our UK-based counterparts who populate cities including London and Manchester.

During virtual tea breaks, we - like many home-based workers - often talk about the things we’ve been watching, reading and listening to, whiling away the days until we can get out and get exploring again.

Here, we share some of our favourite TV shows, documentaries, films, podcasts and books that have helped us to escape this past year.

I often take a bus over a taxi when I'm travelling for fear of being a 'fathead', and for this I have Paul Theroux to thank.

His 2008 travel book 'Ghost Train to the Eastern Star' sees a 66-year-old Theroux retracing the steps of a trip he made 33 years earlier. The journey - mainly by train - takes him through Europe to Turkey, down to India, Vietnam and Japan.

He often compares the countries as he finds them now from how he remembers them as a younger man. So as well as his prescient observations and lucky encounters, the book is packed full of history. I find myself returning to this book for travel inspiration as I like his style of travelling - of trying to experience and learn from a culture rather than just passing through.

One quote stands out: "Luxury is the enemy of observation, a costly indulgence that induces such a good feeling that you notice nothing. Luxury spoils and infantilizes you and prevents you from knowing the world. That is its purpose, the reason why luxury cruises and great hotels are full of fatheads who, when they express an opinion, seem as though they are from another planet."

If I want escapism and to think about foreign lands for a bit, there’s nothing like the work of David Sedaris. I don’t believe a funnier, better writer exists on the planet and, luckily, he’s been working for years and there is an absolute wealth of content.

For travel-related tales, my favourites are ‘When You are Engulfed in Flames’, which takes readers from North Carolina to the Normandy Countryside; ‘Me Talk Pretty One Day’ which is all about his trials and tribulations while living in Paris; and his latest release, ‘Calypso’, which jumps about, but is predominantly situated in America’s East Coast.

The best part for me is that all his work is available as audiobooks and podcasts, so you can hear his particularly unusual and delightful voice reading his equally bizarre words. David has got me through the bulk of lockdown so far.

I am the world’s worst but most persistent surfer. There aren’t many places I can catch a wave in central London, so I have been feeding my longing for the ocean with documentaries.

‘The Endless Summer’ is an absolute classic from 1966 which follows two surfers as they set out on a trip around the world to avoid the chill of winter. I recommend checking out its cool retro vibes if you are looking for a bit of sun by-proxy.

My favourite recent discovery, however, has been 2016’s ‘Gaza Surf Club’. Profound and complex, it tells the story of the Israeli-Palestinian conflict through a completely unexpected lens. Well worth a watch even if you aren’t interested particularly interested in the sport

The first travel series I ever watched was ‘Around the World in 80 Days with Michael Palin’, shown on the BBC in 1989.

It was the first travel series Michael Palin did - he was previously known for his role in Monty Python. He tries to circumnavigate the globe in less than 80 days, like Phileas Fogg in the classic Jules Verne novel of the same name.

It was actually one of the things that made me want a career in media – he made it look so fun. I’d recommend this or any of his series. Wanderlust guaranteed. You can find them online, or on BBC iPlayer if you’re in the UK.

If, like me, you’re fascinated by getting to the hills and mountains, I would recommend the aptly named ‘The Mountain’, a 2017 documentary film directed by Jennifer Peedom.

The film will transport you to the highest peaks around the world, showcasing the most ravishing wonders of our planet as well as providing an interrogative look at our relationship with nature.

As an Anatolian boy who spent the first 10 years of his life on the Taurus highlands as a shepherd, now based in Lyon, the French Alps have become my refuge when I long for mountains.

That leads me onto my favourite documentary about the Alps: ‘A Symphony of summits - The Alps from above’. This is a unique cinematic travel expedition with breath-taking aerial shots of the mountain range.

If you want to deep-dive into your virtual connection with nature, I’d recommend ‘Our Planet’, an amazing documentary series on Netflix. The series takes us through the most beautiful landscapes, faunas and wild nature on Earth, makes you think about the ruthless consequences of climate change.

I’m a climber in my spare time, so I would reccomend ‘Free Solo’ and ‘The Dawn Wall’ on Netflix. ‘Free Solo’ follows rock climber Alex Honnold, who tackles a free solo climb of El Capitan in the Yosemite National Park. ‘The Dawn Wall’ is about another free climber, Tommy Caldwell, and his climbing partner Kevin Jorgeson, who attempt to scale the 1000m Dawn Wall (also in Yosemite).

March of the Penguins is a stunning cinematic watch too, it’s a French feature-length documentary by Luc Jacquet about the lives of penguins. There are some amazing shots of the Antarctic and South Pole.

Lockdown has actually prompted me to watch my first ever Attenboroughs and Therouxs (I’m sorry). I’m not a big watcher, but I recently started 'The Great Escapists' which is a survival documentary featuring the UK’s own Richard Hammond - he’s essentially stranded on a desert island, which honestly seems like a dream after this past year. At least it’s warm and trying to stay alive passes the time.

I’ve become increasingly interested in podcasts as an instrument of entertainment during the many, many lockdown walks. One to note is 'The Travel Diaries' podcast by Holly Rubenstein, where she interviews various celebrities about their experiences in travel.

When I need a bit of escapism and to be awe-inspired, I watch any of the Nuit de la Glisse films by Chamonix based director, Thierry Donard.

The films feature some of the world's best extreme athletes pushing the limits in mountains and in oceans across the globe. You can watch on Netflix.

The first thing that comes to mind for me is 'Ashes and Snow', a film by Canadian artist Gregory Colbert. This is essentially a photographic poem about the relationship between humans and animals.

Colbert has also created the Nomadic Museum under the same name featuring all of his films, photography and travel letters.

How have you been escaping in the past year? Tell us on Twitter @euronewstravel.

This Californian desert is covered in unexpected snow