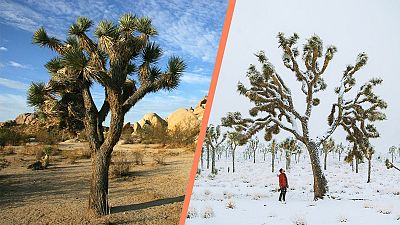 Before and after: Joshua Tree National Park is usually home to a desert climate   -   Copyright  Getty via Canva & Chris Poplawski via Instagram
By Sarah Palmer  & Scott Brownlee  •  Updated: 08/02/2021

Over the past few weeks, Joshua Tree National Park in California has seen some uncharacteristic snowfall. While snow isn’t completely unheard of in the area, this year it extended down to the valley floors, which signifies it’s been a heavier spread than the park is accustomed to.

The protected national park, located in southern California, is home to rugged rock formations and its namesake, the twisted, bristled Joshua trees. The park spans 3,000 kilometres and usually sees up to three million visitors each year.

When news of the snowfall reached the media and photographers, locals flocked to the site to capture it in snow.

Usually, the park is popular with hikers, camping and climbing. It’s also perfect for star gazers, far enough away from the surrounding cities like Palm Springs and Los Angeles to get a clear view of the skies.

How does snow fall in the desert?

Deserts around the world are known for their drastic ranges in temperature. Scorching hot days and freezing cold nights are common in areas like the Sahara. This is because the humid air often found in desert climates doesn’t trap the heat from the sun throughout the day.

During the winter, Joshua Tree National Park does present quite a high humidity due to its relative proximity to the sea. Even though the summer months are the park’s least popular for visitors because it’s just too hot, in the winter the area does cool down significantly.

The best travel documentaries, books and podcasts for during lockdown