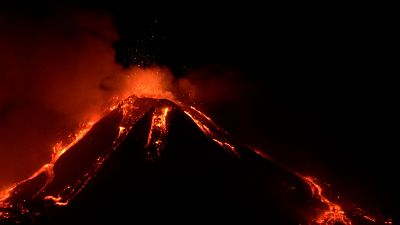 Mount Etna is one of the best-known active volcanoes in the whole of Europe. Over the weekend, a series of underground earthquakes saw it ooze amid explosions caused by the movement 10 - 20 km under the ground.

On Sunday, a swarm of small earthquakes meant Etna released a paroxysmal explosion. A volcano expert says a split in one of Etna's craters has added to the spectacular visual display.

"The one that is really very active now is the south-east crater which in these last weeks has been completely broken apart. It's dissected, it's really split in two like a banana split," said Carmelo Ferlito, Volcanologist, University of Catania.

Luckily, the lava has been flowing into an uninhabited valley, so no one is in danger. Watch our video to find out more.