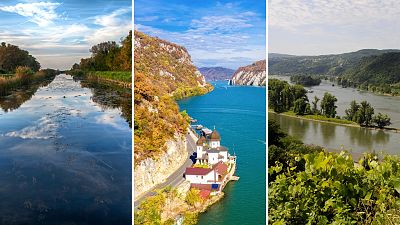 The great rivers of Europe showcase the continent in a totally different way to when you’re on foot. Crisscrossing some of the most unspoilt destinations, these beautiful rivers give you a heightened appreciation for the great outdoors.

Whether you’ve travelled these waters once, many times or not at all, you are guaranteed to unearth a memorable experience on each journey. Let us inspire you for your next river adventure with some unique experiences along Europe’s waterways.

Located in Central and Eastern Europe, the Danube is not only the continent’s second longest river after the Volga, it also runs through the most number of countries in the world. These 10 countries include Germany, Austria, Slovakia, Hungary, Croatia, Serbia, Romania, Bulgaria, Moldova and Ukraine.

A third of the river’s total length is in Hungary and its capital Budapest is sometimes fondly called the ‘Queen of the Danube’. The river becomes quite spectacular at night when lights from Budapest’s Chain Bridge can be seen shimmering on it and the striking Parliament Building with its 314ft-high dome dominating the skyline.

But one of the charming natural beauty spots the river graces en route to the Black Sea, is the Wachau Valley in Austria. With vistas at every turn, lush vineyards and rolling hills, it’s enough to captivate anyone into awe-inspiring silence.

The alpine city of Salzburg linked to blockbuster the Sound of Music, is every inch as breathtaking in real life as it is as the backdrop for the iconic 60’s film. It provides for a great cultural exploration as you walk in the footsteps of the Trapp family at the original shooting locations alongside taking in the area’s natural beauty.

Similar to the Danube, the Rhine cuts through the heart of Europe dividing the north and south as it flows from the Swiss Alps to the North Sea. Some of the unforgettable beauty spots include the Black Forest of Germany. Filled with carved valleys, thick woodlands and meadows, the mystical Black Forest is as deep and dark as its cherry gâteau namesake.

If you wish to explore the German region on foot, make sure not to miss the Vogtsbauernhof Open Air Museum – where the culture and history of the area truly come to life.

Then, you can’t get any greener than Amsterdam with its array of tranquil green spaces, which offer much-needed sanctuary from the bustling city. The most popular is Vondelpark, loved by locals and tourists alike.

Bird watchers may also be in for a treat as the park has seen an influx of rare rose-ringed parakeets in recent years.

An icon of France, this river stretches from the Swiss Alps to the Mediterranean, taking in fragrant lavender fields and vineyards along the way. So first off, if you want to delve deeper into the history of lavender, the Musée de Lavande in Cabrières-d'Avignon is the place to head to.

The heritage centre there showcases fascinating stories of the lavender producers and distillers of southern France. You can buy authentic Provence lavender products from the gift shop which are renowned for their medicinal properties.

But if wine is more your thing the region boasts a vineyard, Saint-Joseph, which covers a steep terraced outcrop and is a joy to hike around if you’re feeling active. As you meander around the sloping winery, learn about its history and the way vines grow in thin dry soil.

This makes them ideal to use in dry chardonnay and heavy pinot noirs!

If you stay in France, you’ll get to the river Seine which flows through the northern part of the country. There is plenty of culture to take in along its banks, including the legacy of Joan of Arc, the battlefields of the Somme and tapestry of French history.

And the nature here is not to be sniffed at either. The limestone cliffs of the Alabaster Coast are just as glorious as the White Cliffs of Dover situated 20 miles away across the Channel. Outdoor enthusiasts can immerse themselves in nature by enjoying a coastal walk.

If you prefer travelling on two wheels, explore the charming commune of Villequier. Lying directly on the banks of the Seine, this village and its surrounding areas is great for cyclists to discover.

This Douro meanders through Portugal’s mountainous north region, weaving its way through towering forests and plenty of wine regions.

From Porto to Salamanca, some of the striking natural sights of the Douro include the village of Afurada where you can meet the fisherman to learn all about the historic commune on the outskirts of Porto. The village has a long fishing and seafaring legacy, which proud local people are only delighted to tell you about with their tales of the sea.

If you like delving into the past, go and marvel at the Prehistoric Rock-Art Site of the Côa Valley located at the bank of Côa - a tributary of the river Douro - in northeastern Portugal, near the border with Spain.

The open-air archaeological site has fascinating engraved rock drawings from pre-22,000BC, located in the midst of stunning landscapes.

This vintage steam train in Russia takes passengers back in time

Travel the world from your sofa with this random location generator