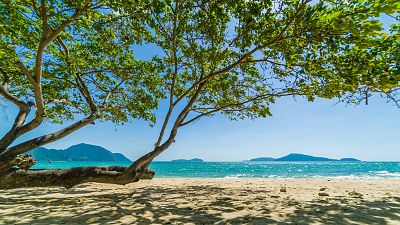 You could end up on a tropical beach with the random location generator   -   Copyright  Getty Images
By Rachel Steinberg  •  Updated: 07/12/2020

Close your eyes. Spin the globe. Put your finger down to stop it. There - now look. That’s where you’re going to live.

It’s a thrilling sensation we all remember from the classic childhood game: scaling the topography of the map beneath your fingertips before opening your eyes to reveal an exotic destination, miles away from your boring hometown.

A viral location generator is recreating that same sense of discovery in a far more interactive way. The online tool invites users to globetrot from the comfort of their homes by revealing hidden beaches, far-flung villages and unique attractions with the click of a mouse.

American father of three Danny Holmgren, 36, discovered the Random Street View site via Facebook, where came across a post asking if people would move to their arbitrarily-selected locations for $5 million.

Posing the question on Twitter himself, the response he got was overwhelming, generating over 10,000 comments and 43,000 retweets from all corners of the world. There were so many shares, Holmgren marvelled, that he’d even heard stories of long-lost friends reconnecting through the tweet.

Its universal appeal, he speculates, comes from a combination of the fantastical prospect of having $5 million to spare, and a deeper desire to escape our Covid-restricted realities. The ‘real world’ isn’t very exciting at the moment, and has challenged many of us to consider if we’re truly living our best lives, giving us ample time to plan our next adventures too.

Holmgren, whose first randomly-generated location was a Bulgarian country road, explains, “I thought it was interesting seeing a lot of people respond, and it was just like random pictures of a countryside, not necessarily the most picturesque, just a little Podunk town with nothing around in Hungary or Romania or in Asia somewhere.

“But you see all these people who come from big urban centres that suddenly see the appeal of, ‘oh my gosh, there’s nobody else around’. I could totally do that for ten years.

That was part of it too, he adds. “The desire of going from my current, urban, loud, noisy, busy life, to just the laidback life of a person who lives in the countryside and rides their bike into town to buy their daily bread.”

The concept - as the generator’s ‘does what it says’ tagline explains - is simple. Curious visitors click a button and are dropped into the street view of a location anywhere in the world. From there, they can explore the area on ‘foot’, wandering around Cambodian villages or taking virtual strolls down sandy Greek beaches.

Where did people end up?

Some people got lucky on the first try. Twitter user Steve Duckworth landed on a stunning sandy canyon near Alice Springs, Australia.

Jonathan Small thought, “Skiing, snowboarding and hiking in Switzerland? Sign me up!” when he found himself on a mountain run near the Swiss-Liechtensteinian border - slopes he’d actually skied in the past.

Scotland might conjure up images of rainy skies or packed city streets during the Edinburgh Fringe, but, as Ed Brooks discovered, the tiny Hebridean Isle of Eigg offers some of the UK’s finest scenery. With a population of just under 100 people, eagle-spotting, felt-making classes, kayaking, freshly-caught seafood and a shop selling willow baskets are just some of its many attractions.

“I could live with that view forever,” remarked Brooks on his Scottish seascape.

Others weren’t so fortunate. But that was all part of the fun for people like Colorado-based Steve, who saw the bright side in being sent to what he was fairly certain was a dung heap on a French farmer’s field.

His response was along the lines of, “Hell yes, even though it’s a load of manure, it’s outside Paris!”

Users also have the option of filtering results to one country, so the tool might just be the trick if you’re looking for staycation inspiration.

For some, the generator shattered stereotypes of what a country could offer. Darius Austin, 34, would normally picture beach holidays in places like Catalonia’s Costa Brava, not Lithuania.

But the British administrator, who said his mother became “weirdly addicted” to the site after he showed her, might be trading in the Spanish seaside for sandy Baltic shores after discovering they did, in fact, exist.

“I never really thought about [Lithuania] having beaches! But then, I know nothing about Lithuania,” he admitted.

And if you’re fond of drafting quirky experiences onto your dream itineraries, the generator offers them in spades. One person found themselves atop a German tower, and another was packing their virtual bags for Nagoro, a small village in Japan’s Iya Valley. A place where hundreds of life-size dolls sit at bus stops and in classrooms, vastly outnumbering the residents.

From his home in Utah, Holmgren continued to marvel at the popularity of his tweet, which he said doubled overnight.

The executive director, who usually takes 3-4 trips a year with his wife and kids, said his whole family is missing the ability to escape to the unfamiliar. It’s an acute sense of restlessness he’s now discovered he shares with everyone from Salt Lake City to Singapore.

“[Thinking about living] out in the countryside almost eliminates a lot of the things that we’re supposed to be doing, that are changing our life,” he says.

“So in certain ways, a life without masks and without hand sanitiser, without social distancing, and government mandates and all the things we’ve been dealing with for nine months probably has some appeal to a simpler form of life.”

Well, what are you waiting for? It’s time to give your new favourite game a spin.