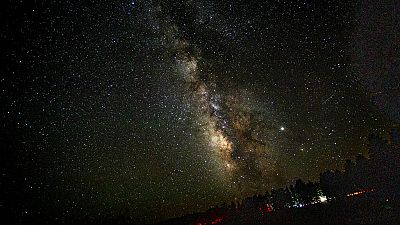 If COVID restrictions mean you’re short of a Christmas kiss this year, you need look no further than the night sky. That’s what scientists are terming the astronomical phenomenon due to drop tonight.

Credit to 2020, it has been a monumental year for ensuring everyone really appreciates the glimmers of hope, big or small, that define what it means to be human.

Earlier this year the UK saw Captain Tom Moore, the (then) 99-year-old war veteran, walking his way around his back garden to raise the equivalent of €16.5 million for the NHS.

Across the empty cities and streets, the pandemic gave nature the opportunity to restore itself. For the first time in living memory, fish and crab shoals could be seen in the canals of Venice due to a drop in tourism-fuelled pollution. Residents of Northern India saw the Himalayas thanks to the cleaner air.

In smaller, but no less significant motions, communities around the world rallied together to protect the elderly and the vulnerable. Normal people volunteered their time and service to do something as simple as a weekly shop for high-risk individuals - an act which probably saved lives.

Cast your mind back to March, when Italy experienced some of the most devastating results from coronavirus, and the whole country was forced into a relentless lockdown regime. The video of people singing from their balconies, spreading light, hope and positivity, went viral.

This winter solstice, we’re looking to the sky for more than just a glimmer of hope - more like a supernova.

The coalition - or ‘great conjunction’ - we’re due to experience tonight will see Jupiter and Saturn appear brighter, and closer to one another than they have in 800 years.

To clarify, this isn’t the first time it’s technically happened in the past 800 years - in fact, it happens roughly every 20. Back in May 2000, the great conjunction’s position in the sky meant it was difficult to see from Earth. And in 1623, for example, the conjunction was likely lost in the sun’s glare due to the Earth's vantage point at the time.

This means the last time we had a view like this was likely March 1226. For context: King Louis VIII was trialling a few sieges in France, and the Carmelite Order was under review by Pope Honorius III in Rome. It’s been a while.

This serendipitous Christmas miracle begs the question: does the great conjunction have anything to do with the Star of Bethlehem?

Encyclopedia Britannica thinks the notion may not be so far fetched.

The phenomenon depicted in the Bible has been rationalised by the world of science through multiple theories, including exploding stars (novae and supernovae), comets, meteors and - as we’ll be witnessing on 21st December - planetary conjunctions.

Jesus’ actual birth year, though not definite, has been pinpointed at around 6 and 4 BC. In 7 BC, it’s believed that Jupiter and Saturn were within a degree of each other three times across an eight month period.

In theory, and unlike the year 2000, it should be visible anywhere on earth - but best views are closer to the equator. That’s Congo, Kenya, the Maldives and everywhere else in parallel.

You’ll be able to see the Christmas kiss for about an hour in the western sky after sunset on 21st December.

Catch a shooting star at these awe-inspiring desert retreats

The Great Conjunction: Jupiter and Saturn align closest in centuries

Stargazing in Italy. The valley honoured by UNESCO for its night sky