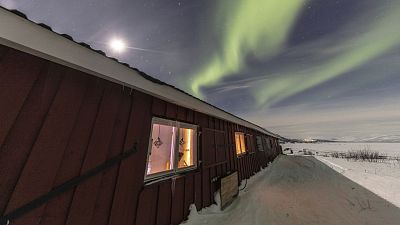 A cabin in Abisko, Sweden. Deep in Swedish Lapland it is a great place to see the northern lights.   -   Copyright  Getty Images via Canva
By Euronews  •  Updated: 05/01/2021

Dotted with historical cities, rich culture and spectacular nature, Europe is packed with exciting places for short breaks and longer adventures when the mercury dips. From soaking up the sun in Spanish coastal towns to chasing the Northern Lights in Swedish Lapland, we’ve handpicked seven of the best winter destinations in Europe.

As the first urban area in France to gain UNESCO recognition, Strasbourg is always charming. In winter, however, it comes into its own as the ‘Capital of Christmas’. A festive market has been held here since 1570, and hundreds of gaily decorated stalls are scattered through the streets and squares of Grande Île, the city’s historic island centre, in December.

Twinkling lights also glitter over the Rhine River and along the banks of narrow canals threading past 400-year-old half-timbered buildings. Head to Place Kléber to see Strasbourg’s huge Christmas tree or follow your nose towards local specialities like bredeles (star-shaped spiced biscuits) and vin chaud (hot wine mulled with fruit).

Winter is also a much more agreeable time for sightseeing in cities like Seville, where midsummer temperatures can reach a fiery 40°C. Explore landmarks such as the Palacio de las Dueñas, with its eye-catching colonnades and arches, or sip sangria at outdoor cafes under the winter sun.

Over Christmas, the region’s predominantly Catholic cities are decked with festive lights. And while you’re unlikely to see snow on the Costa del Sol, the Sierra Nevada National Park some 30km east of Granada offers white-capped peaks and winter sports.

Find out more at andalucia.org

For the Northern Lights: Abisko, Sweden

Deep in the heart of Swedish Lapland, Abisko is one of the best places in the world to take in the Northern Lights. Its inland, lakeside location north of the Arctic Circle is right in the middle of the ‘auroral zone’, boosting your chances of witnessing the spectacular phenomenon.

To see the sky glow in ethereal greens, blues, pinks and purples, take a tour into light pollution-free Abisko National Park during wintertime, or take a 20-minute chairlift ride up to the mountaintop Aurora Sky Station observation centre.

Begin your adventure at kirunalapland.se

The big draw of visiting Athens in winter is that there are far fewer crowds compared with the busy summer season. You can stroll relatively peacefully through world-famous landmarks like the Acropolis, a walled complex containing grand Ancient Greek structures like the Parthenon and Hadrian’s Library.

Although average winter temperatures in Athens are 13°C, the weather is changeable and rain is definitely a possibility. Armed with an umbrella, wander past vibrant street art in the modern city centre and devote any especially wet days to the fascinating museums. Top picks include the National Archaeological Museum and the Acropolis Museum.

Plan your trip at greektourism.com

Add twinkling lights and a dusting of snow to Budapest’s romantic architecture and it becomes even more magical. Hungary's capital is also famous for its Christmas markets that spring up during the festive season. Head to Vörösmarty Square for some of Budapest’s best traditional local foods, like lángos (a deep-fried flatbread) and kürtőskalács (a sweet pastry covered in sugar).

The city’s thermal springs come into their own in cold weather, so don’t miss the spas, sauna rooms and 18 pools at the neo-Baroque Széchenyi Baths. Once you’re feeling thoroughly relaxed, lace up a pair of skates for laps of the Városligeti Műjégpálya outdoor ice rink, one of the oldest of its kind in Europe.

No other city is quite as synonymous with classical sounds as Vienna. Music history thrums through the city's Baroque streets and grand architecture. To immerse yourself in the culture, visit the places where Mozart composed the majority of his work (the Mozarthaus), where Beethoven tried to cure his deafness (the Beethoven Museum) and where Schubert was born (the Geburtshaus).

Winter is also ball season, so spending an evening whirling to Viennese waltzes is one of the city’s most unmissable experiences. The coldest months are a busy period in Vienna’s concert calendar: look out for performances at the State Opera House and other venues.

For chocolate and canals: Bruges, Belgium

The tiny medieval trading port of Bruges is criss-crossed with narrow canals spanned by arched footbridges and lined with tall, thin buildings. Beautiful throughout the year, Bruges ramps up the romance each winter with pretty Christmas markets, horse-drawn carriages and hot chocolate at every teahouse.

Belgian chocolate is famous for a reason, and Bruges is one of the best places to try it. It’s no exaggeration to say that you’ll find some of Europe’s tastiest offerings here. Stock up on handmade treats at favourites like The Old Chocolate House, Olivier’s Chocolate Shop or Chocolates and Happiness. Add in a dash of history with a trip to the Basilica of the Holy Blood, a Romanesque chapel said to house the blood of Christ himself.

Plan your visit at visitbruges.be

Throughout winter 2020, European destinations will continue to be affected by COVID-19. You can check up-to-date travel restrictions on the European Union’s dedicated webpage. If you do travel, keep yourself and others safe by wearing a mask. It’s also worth taking a look at the World Health Organisation’s coronavirus travel advice for some general guidelines on staying safe.