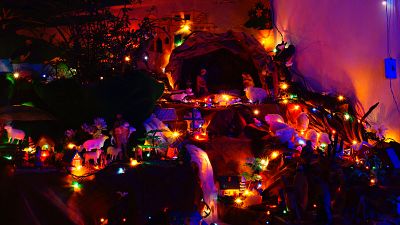 **Faithful to its Catholic traditions, Christmas is very much a religious affair for many people in Italy. **

Nativity scenes are often considered more important than Christmas trees when it comes to decorating for the festive season.

Every year, millions of people recreate the scene of the birth of Jesus as described in the Bible: Mary and Joseph cradling their baby in a manger, warmed up by an ox and a donkey, and visited by shepherds and farmers nearby.

Many presepe (‘crib’ in English) lovers build a whole village of figurines, usually including shepherds, bakers and fishermen around a series of elaborate replicas of houses, shops and barns.

These displays can be found in homes, local churches and across town squares; but hundreds of villages in Italy also organise a ‘living’ version of the presepe, where visitors can walk between people enacting the Bible passage.

Some of the most popular are in Greccio, central Italy - where Saint Francis of Assisi started the tradition in 1223 - and Matera, where the presepe is hosted among its evocative caves.

This year, the living nativities have been put on hold because of the pandemic. However, some of the most spectacular outdoor static exhibitions can still be explored in a COVID-safe way.

Lit up in Manarola, Liguria

Liguria is a UNESCO-listed fishing village, part of the Cinque Terre.

Every Christmas, the town hosts thousands of bulbs and electric cables to form over 300 statues on a hill overlooking the sea.

The tradition was first started by local railway worker Mario Andreoli in 2007. It has since become the biggest nativity scene in the world - and it’s all powered by clean energy.

The lights are turned on every evening, and shine from opening night (8th December) until the end of January. The display is best seen from Manarola’s main square, or the trail leading to the neighbouring village of Riomaggiore.

This northeastern coastal city is famous for its nativity scene made entirely of sand.

The sculpture is crafted by the Accademia della Sabia (Sand Academy) every Christmas, and has been an attraction since 2003.

This year, the theme is “The Care. The Love. The Hope.” and it will only be accessible via the online portal - which is great news for those who can’t make it in person!

To give a little taste to locals, the organisers have set up a small sand presepe near the main church, which includes a replica of the town’s local symbol, the red lighthouse.

A short drive from Milan, Laveno Mombello has incorporated its Lake Maggiore into the Christmas celebrations.

The town’s nativity scene is found underwater. 42 statues come alive in the dark, thanks to the potent lighting - while the statues somehow go completely unnoticed in the light of the day.

Now on its 41st edition, this presepe can be admired until the first week of January.

In Comacchio, visitors will find, not one, but 10 aquatic displays dotted along its canals. The city organises a walking tour across its main bridges, which each have a nativity scene of their own.

Like many other presepe, they will be removed on 6th January, traditionally marked as the end of festivities after the three Wise Men bear gifts to Jesus.

Another trail of nativity scenes can be explored in the medieval town of Perugia, famous for its arts and chocolate.

Each of the eight installations has its own theme. Among this year’s offering, the Presepe Monumentale reproduces some of the historical buildings of the city, while the Presepe Antico is made of figurines built in the 1800s.

Via San Gregorio Armeno is a tourist attraction in its own right when it comes to the presepe.

Located in the historic centre of Naples, which is a UNESCO heritage site, the street is home to artisan workshops creating and selling figurines of all sorts (including the city’s hero Diego Maradona, and pizza chefs stood next to an oven).

Though it is at its busiest in the festive period, under normal circumstances the shops are open for browsing all year long.

Mythical grottos: The most famous caves in Greece