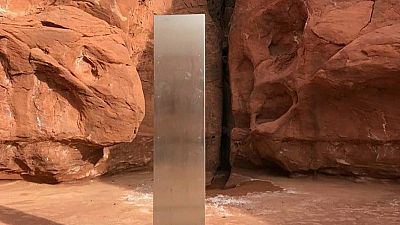 A metal 'Space Odyssey' structure has been discovered in the Utah desert.   -   Copyright  Utah Department of Public Safety
By Laura Sanders  •  Updated: 25/11/2020

The mystery behind a space monolith which was discovered in a remote part of the Utah desert has gone viral on social media, as officials warn people not to go looking for it.

With an uncanny likeness to the one which appears in the 2001 Stanley Kubrick movie, ‘A Space Odyssey’, this smooth metal structure of 3-4 metres in height certainly looks at home in the other-wordly landscape of Utah’s red-rock desert.

The discovery was made during a helicopter survey between the Utah Department of Public Safety Aero Bureau and the Utah Division of Wildlife Resources, who were out conducting a count of big horn sheep in southeastern Utah last Wednesday.

As demonstrated in the photo (above), the three-sided stainless-steel object is about as tall as two men put together. Officials are now trying to find out who might have driven it into the ground among the undulating red rocks, when, and why.

Don’t worry though, we shouldn’t be preparing for an alien invasion just yet. “This thing is not from another world,” says Lt. Nick Street of the Utah Highway Patrol.

The red-rock desert is public land, which means the object has been placed there illegally. An official investigation has been launched, where officers will decide whether or not to remove the installation. A spokesperson from the Bureau of Land Management said in a statement on Tuesday:

“Although we can’t comment on active investigations, the Bureau of Land Management would like to remind public land visitors that using, occupying, or developing the public lands or their resources without a required authorization is illegal, no matter what planet you are from.”

With its miles of hiking trails stretching across southern Utah, the red-rock desert is a popular destination for outdoor enthusiasts.

People are advised not to go looking for the monolith

The exact location is so remote that officials are not revealing it publicly because they’re worried about people getting lost or stranded trying to find it.

In a tweet, the Bureau of Land Management is urging the public not to go looking for the monolith because “the road is not suitable for most earth-based vehicles.”

Lack of tourists in New York is wiping out small business